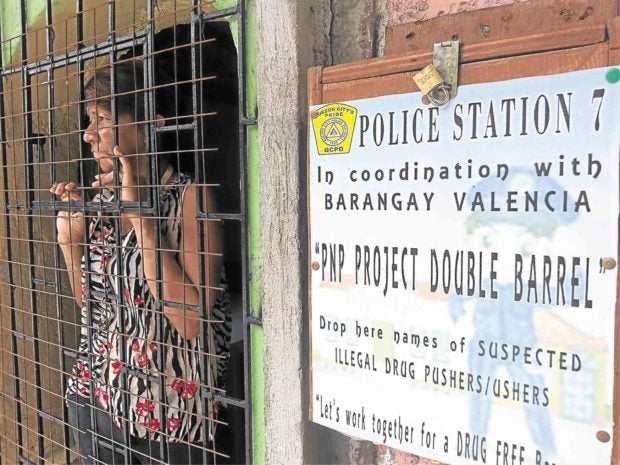 One of the three “drug boxes” in Barangay Valencia, Quezon City—PHOTO BY Nikka Valenzuela

It is a drop box where “suggestions” can lead to someone’s arrest — or worse.

In line with the Duterte administration’s war on drugs, the Quezon City police and local authorities have been encouraging residents to write down the names of suspected drug users and pushers in their community on a piece of paper.

From there, eager informants need only to look for the nearest “drug box” where they can do their part in making their villages “drug-cleared.”

A photo of one such box installed in Barangay Valencia recently went viral.

According to Chief Supt. Guillermo Eleazar, director of the Quezon City Police District, there should be at least one box in each of the city’s 142 barangays.

In an interview on Saturday, Eleazar said it was put up specially for residents who don’t have cell phones or other means to report drug activities in their neighborhood while remaining anonymous.

Having such a box was also one of the requirements set by the local government, mainly through the City Anti-Drug Abuse Council (Cadac), he added.

But Eleazar maintained that all the information gathered through those padlocked boxes were kept confidential and still “subject to validation” by the police. “It does not automatically mean that (the persons named) are engaged in drugs.”

Reached for comment, Commission on Human Rights media director Joel Sarmenta said information gathered by the police through such a method may be treated like “anonymous tips.”

But danger arises, he said, when those pieces of paper become “the sole basis for arrests” or for “haphazardly” drawing up the so-called drug watch list in every barangay.

Since the start of the drug war, the police have often described slain drug suspects to be on such lists.

“Having the drop box is tolerable if (the information gathered) serve as mere leads in investigating a person, but they cannot be considered proof,” Sarmenta stressed.

The viral photo of the Barangay Valencia drug box has since sparked dark humor on social media, with one netizen calling it “crowd-sourcing EJK (extrajudicial killings) 2.0.”

Another suggested that “if you want your ‘best friend’ to leave this world, just write down his name.”

According to Barangay Valencia chair Anna Millonado, “this is a Philippine National Police program. It is one of the ways to seek assistance from the public with regards to information about drug pushers, users and drug lords.”

QCPD’s Station 7 (Cubao) asked the barangay to install the boxes to ensure the cooperation of the residents in the war on drugs, Millonado said.

She noted that Barangay Valencia—which actually had not just one but three boxes—was declared drug-free in January this year.

The box in the viral photo is installed in front of a small dressmaking shop in a middle-class neighborhood on Castillas Street.

According to one of the seamstresses, it has been there for over a year and, yes, people had indeed dropped some “entries.”

“The contents of the box are confidential. The (padlock) key is not with us but with the focal person at Station 7,” Millonado explained.

This focal person is PO1 Ramon Beltran, who opens the box once a week. Beltran declined to give details about the contents.