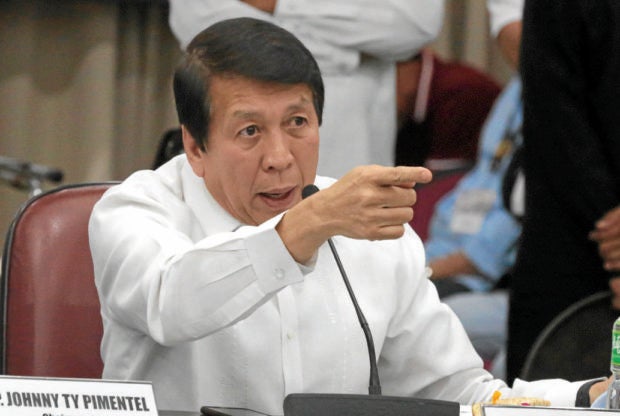 House Majority Leader Rodolfo Fariñas on Saturday accused Customs Commissioner Nicanor Faeldon and his aide of “covering-up” the issue on the P5-billion worth of smuggled shabu.

“Clear machinations to cover up the smuggling of P5B (worth) of shabu! How many more have been successfully smuggled into our country?!” said Fariñas in a message to reporters, referring to smuggled shabu, which entered the country through the Bureau of Customs’ (BOC) “express lane” on May 23.

Fariñas also detailed a timeline of events that surrounds the whole issue, saying the recent statements of Faeldon and his chief of staff Atty. Mandy Anderson against him and House Speaker Pantaleon Alvarez are “clear attempt(s) to divert the issue on the BOC’s ineptitude.”

“During the hearing, AA (Atty. Anderson) in gleeful mood claimed that her post was private and although she apologized to me and the other members of the House, she did not apologize to the Speaker,” the majority leader said referring to the House of Representatives’ hearing on Wednesday where she criticized Anderson for her Facebook post calling Alvarez an “imbecile.”

“Who could have leaked her private post if not she herself and her cohorts in order to divert the public from the House investigation of the successful smuggling of more than five billion pesos worth of shabu through the BOC Express Lane?” he asked.

Despite the disrespect to the Speaker, Faeldon on Thursday said he was not inclined to fire Anderson saying he needs someone like Anderson, who has the integrity, in the Bureau.

Fariñas added that after the afternoon hearing, Anderson was on mainstream broadcast media later in the evening explaining her alleged disagreement with Alvarez. She even claimed that the Speaker vowed to raise hell for them, to be able to divert the issue of the shabu smuggling.

“Hindsight is the best sight—isn’t the dragging of the name of the Speaker by AA a clear attempt to divert the issue on the BOC’s ineptitude, given all the former military officials in its leadership?” Fariñas asked.

“Were it not for China’s apprehension in Xiamen of the source of the shabu and its alerting the BOC of the smuggling of almost a ton of shabu, the BOC’s ‘Express Lane’ would have successfully facilitated P5B worth of shabu into our country,” he added in the same text message sent to the media.

The House majority leader pointed out that the real issue is the BOC’s alleged incompetence, adding that they will not be distracted by Anderson and her “gang in the BOC.”

“This is the real issue that the House is investigating, and it will not be distracted by the machinations of AA and her gang in the BOC, not even by their outrageous falsification of their attendance to the Mandatory Continuing Legal Education (MCLE) mandated by the SC (Supreme Court),” Fariñas said accusing Anderson.

“She and her two other lawyer colleagues in the BOC were only recently admitted to the Bar; yet, they have the alleged audacity to have falsified their participation in the MCLE by sending impostors in their place to such seminar required of all lawyers!” he added.

Meanwhile, Fariñas said the House of Representatives will also look into the matter of consultants who are performing functions reserved by law to those in the Civil Service.

“After the HOR terminates its investigation of the P5 billion shabu smuggling through the BOC, we will also look into the matter of consultants, who have no public accountability, but are performing functions reserved by law to those in the Civil Service. Consultants, as their title indicate, should only give advice or consultation, but not directly performing administrative governmental functions and duties,” said Fariñas. JPV