Duterte: I’ll never hurt lumad kids, I want to save them from NPA hatred

Lumad schools used for subversion will only be bombed when they're empty - President
By: Leila B. Salaverria - Reporter / @LeilasINQ
Philippine Daily Inquirer / 09:34 PM July 27, 2017 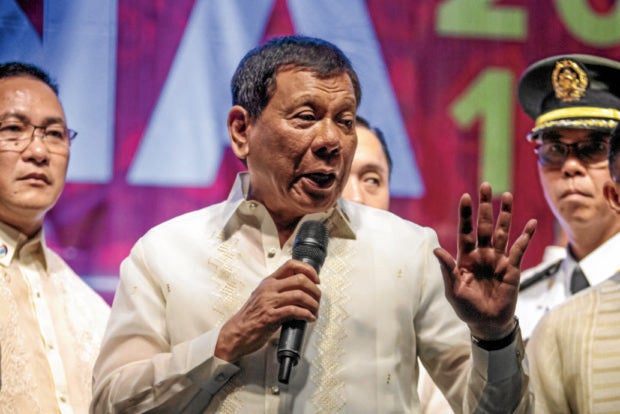 President Duterte meets militant groups outside the House of Representatives on Monday, July 24, 2017, after his State of the Nation Address before Congress.  Mr. Duterte later held a press conference, wherein he threatened to bomb lumad schools for their involvement in communist subversion. (INQUIRER FILE PHOTO / LEO M. SABANGAN II)

MANILA — President Duterte has said that while he wants to destroy unlicensed lumad schools, he has no intention of harming the children who learn in them.

On the contrary, Mr. Duterte wants to save them from perdition, from growing up as another “generation of haters.”

“I did not say I would bomb it while there are people there. That’s why I told you to get away from there. That means I would destroy them because you are using a school without a license from the Department of Education,” Mr. Duterte said on Thursday evening, after visiting the wake of slain police officers in Negros Oriental.

President Duterte was referring to the communist New People’s Army, which has allegedly been using the schools to indoctrinate the younger generations of lumad with communism.

“I did not say I would kill the children. Far from it, actually. I would free the children from your perdition because otherwise, they would learn to be like you,” he added, addressing the communist
rebels.

These schools are being used to destroy the mental health and attitude of children and sow division in the country, according to the President.

Duterte vowed to do his duty to stop these schools.

“They grow up there hating government and going to war when they are adults. You are perpetuating the violence in this country and I have to stop it. I have every reason to stop it because you are producing another generation of haters,” he said.

Mr. Duterte threatened on Monday, to bomb  lumad schools that he said where being used to indoctrinate youngsters with the communist ideology and subversion, a move that drew condemnation and concern from various groups.

A network of indigenous peoples’ schools has since appealed to him to spare the learning spaces from attacks, saying these have helped children in areas that the government could not easily reach.

The Save our Schools Network, which covers 222 lumad schools, said it has secured permits and have partnered with government in addressing illiteracy in indigenous communities.  SFM