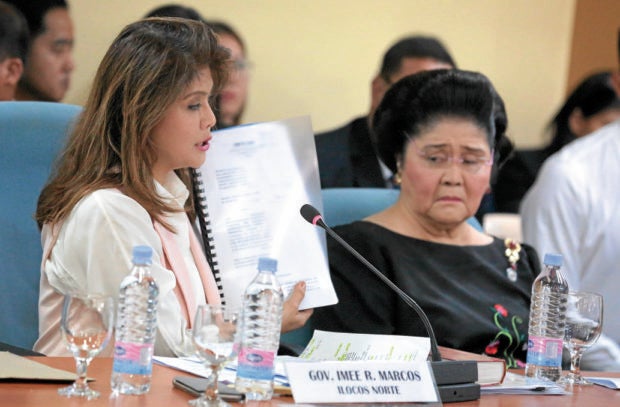 Ilocos Norte Gov. Imee Marcos with the Marcos matriarch Rep. Imelda Marcos, seated beside her, as she shows a copy of the petition for the writ of habeas corpus she filed before the Supreme Court during the House tobacco excise tax inquiry on Monday, July 25, 2017.
INQUIRER FILE PHOTO / GRIG C. MONTEGRANDE

The petition for a writ of amparo filed by the camp of Ilocos Norte Rep. Imee Marcos before the Supreme Court (SC) will continue despite the release from detention of the “Ilocos Six,” who have been detained at the House of Representatives for almost two months.

Speaking to reporters on Wednesday during the Kapihan sa Manila Bay forum, Marcos said the petition for the writ of habeas corpus is the only prayer that was rendered moot by the release order issued by the House on Tuesday, July 25.

Marcos said the petition for a writ of amparo stays before the SC.

A writ of amparo is a remedy available to any person whose right to life, liberty and security is violated or threatened with violation by an unlawful act or omission of a public official or employee, or of a private individual or entity.

The writ of amparo has been included in the petition after Congress threatened to also put Marcos in detention.
“Kahapon nga, dalawang beses nga ako i-cocontempt dapat. Sino ba namang hindi kakabahan nyan?” (Yesterday, I was supposed to be cited in contempt twice. Who wouldn’t fear them,” Marcos said.

She even joked that she was ready to be detained. “May maleta ako kahapon,” (I have a luggage with me.) said Marcos who was earlier threatened to be detained in the House.

Marcos however, refused to further discuss the petition at the Supreme Court as advised by her lawyers.

Marcos was flanked by her lawyers and even former Senate president Juan Ponce Enrile when she walked into the House, which caused a stir since Enrile was one of those who first withdrew support to the governor’s father, the late dictator Ferdinand R. Marcos Sr., and eventually overturned the martial law rule.

But Marcos said: “Past is past,” adding that Mr. Enrile “has spent more time with us, than against us.”
She even ribbed Mr. Enrile as one who was easy to bring along since he was “jobless.”

The respondents were given 10 days from the receipt of the resolution to file their comment. JPV