President Rodrigo Duterte submitted to Congress an “activist budget” of P3.767 trillion for 2018 during his State of the Nation Address (Sona) on Monday, the first time in years that a Chief Executive had done so.

A day later, on Tuesday, opposition lawmakers expressed concern that the proposed budget might be railroaded after Speaker Pantaleon Alvarez set an October target for its passage.

In a budget message, Mr. Duterte told lawmakers it was imperative to appropriate funds to fulfill the longing of the people and address their aspirations for “a life that is firm, prosperous and peaceful.”

Education and infrastructure development get the highest allocations, though there are also hefty amounts set aside for the police and the military.

“With much still to be done, we need a more activist budget to fulfill the longing of our people,” Mr. Duterte said in his message.

He said his administration’s goal was to restore the Filipinos’ trust in a people-centered, clean and efficient government, and spoke of transforming the bureaucracy’s basic behavior and culture.

Davao City Rep. Karlo Nograles, chair of the House appropriations panel, said the education sector would receive the biggest appropriation at P691 billion, or P41.7 billion more than the 2017 budget.

The bulk will go to the construction of 47,000 classrooms, repair and rehabilitation of 18,000 classrooms, procurement of 84,781 school seats and creation of 81,100 teaching positions.

The 2018 appropriations represent a 12-percent increase from the current year’s P3.35 trillion and are equivalent to 21.6 percent of the gross domestic product (GDP), officials said.

In a press briefing before the Sona, Alvarez said the House of Representatives was aiming for the earliest possible passage of the 2018 budget. 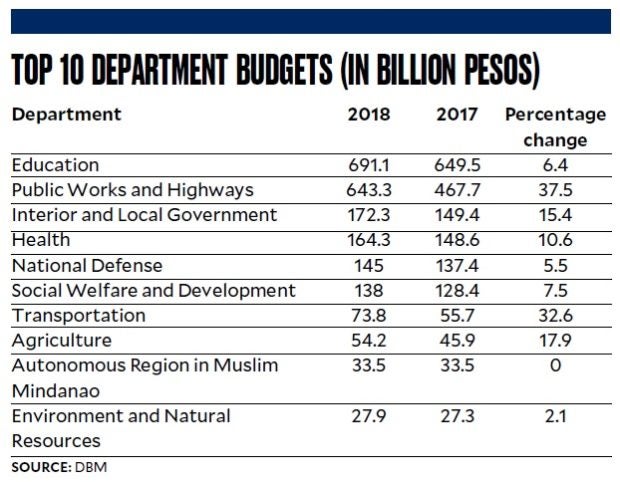 “For the budget next year, our target here is we need to pass it within the month of October,” he said.

Albay Rep. Edcel Lagman said on Tuesday that deliberations on the national expenditure program might be cut short just to beat the deadline.

“October is too early to pass the budget,” Lagman told a press briefing.

The 2018 budget assumes P2.841 trillion in government revenue, equivalent to 16.3 percent of GDP.

Nearly 30 percent of the proposed budget is allocated to personnel services, while a quarter will go to infrastructure and capital outlays.

In a statement, Nograles gave details of other proposed appropriations for next year:

A P6.6-billion budget for the Mindanao Railway Project Phase I, which will cut down travel time from Davao City to Surigao and Cagayan de Oro from eight to two hours.

Some P1.4 billion of this amount will be spent for the hiring of 10,000 new Police Officer 1 recruits to expand the current count of around 194,410 police officers.

The government would also spend P3.6 billion next year for the Bangsamoro Regional Inclusive Development Program for Sustainable Growth and Equity to strengthen local governance and empower communities in the Autonomous Region in Muslim Mindanao.

Nograles said the “fiscal expansions” would include reforming tax laws.

He said the proposed budget was committed to sustain and even expand programs that would help mitigate the burden of the poor and the vulnerable. —With a report from Leila B. Salaverria