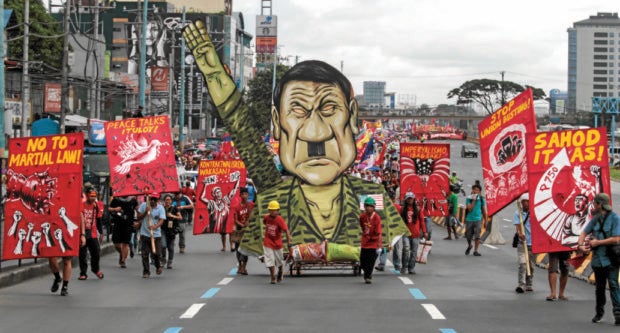 DUTERTE EFFIGY One side of the two-faced effigy of President Duterte looked like that of Hitler. Protesters paraded the effigy on Commonwealth Avenue in Quezon City before the President delivered his State of the Nation Address. —LEO SABANGAN II 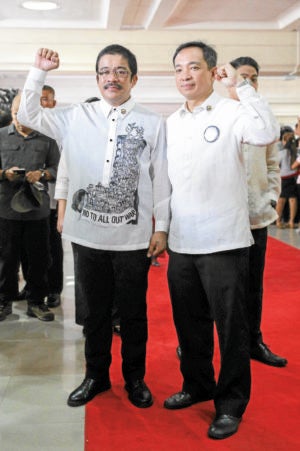 In Quezon City, near the House of Representatives where Mr. Duterte delivered his Sona, critics assailed the extension of martial law in Mindanao and the scrapping of peace talks with the Communist Party of the Philippines — the same issues raised by protesters in other parts of the country.

Sister Teodora Bilocura of St. Scholastica’s College said she attended the rally to assail the extension of martial law in Mindanao.

“Is this the change he promised?” she told the Inquirer. “It’s more like a President that keeps changing his mind.”

The police placed the number of protesters at 10,000 but Bagong Alyansang Makabayan (Bayan) secretary general Renato Reyes said the demonstrators numbered 35,000 to 40,000.

“Under his administration, regularization has already happened: It is now regular to kill drug suspects, regular to sabotage peace talks, regular to militarize, and regular to spread fake news and disinformation,” Reyes said.

“Promise-breaker,” was how most of the protesters described the President.

“We are used to Duterte playing with words. He is a social media President, who is fond of saying press releases. But these are lives Duterte is playing with,” said Sean Herbet Velchez, spokesperson for the Alliance of Health Workers.

The Block Marcos Movement displayed some 1,200 shoes and slippers sprinkled with red “blood” on Commonwealth Avenue to represent those who were killed in the war on drugs and those who died in the ongoing clashes in Marawi.

The marchers paraded several pieces of protest art, including the first effigy for the Sona protest under the Duterte administration.

A “two-faced” President was also paraded, showing a casual Mr. Duterte on one side and a Hitler-like image on the other.

At the rally, representatives from the Makabayan bloc dropped by.

In Baguio City, some 300 demonstrators marched down Session Road, wearing paper headbands bearing angry-face emojis, which millennial activists described as the grade they gave the President in his first year in office.

Some performers in the group wore masks of the President, Lorenzana and Armed Forces Chief of Staff Gen. Eduardo Año, while chained to an activist playing Uncle Sam.

“We will recognize that positive steps were made on land reform, free tuition, free medicine, [and] the increase in the Social Security System pension fund,” the CPA said.

But the CPA said these were muted by another breakdown in the peace talks with communist rebels, the extension of martial law in Mindanao and the promotion of “antipeople and militaristic policies” like proposed increases in the value-added taxes for goods.

They demanded the scrapping of a Land Transportation Franchising and Regulatory Board order that would phase out public utility jeepneys that are at least 15 years old.

Members of the multisectoral group Cadena Bicolandia (Bicol Chain) came up with its own Sona in the Bicol region, noting, among other things, extrajudicial killings.

Coconut farmers in Quezon province lit candles and prayed to seek heaven’s intercession so that Mr. Duterte would make good on his election promise to release the coco levy fund.

Many protesters came in red and took to task the Duterte administration for reneging on its campaign slogan “Change is coming.”

At the Freedom Grandstand in Iloilo City, about 1,700 protesters led by Bayan paraded an effigy of a tank with Mr. Duterte on board along with Lorenzana, Esperon and Año.

They burned the effigy but “spared” that of Mr. Duterte as organizers said they were still pushing for him to fulfill his promises.

Alab Katipunan-Panay held a separate protest rally in Iloilo City joined by around 800 mostly farmers from towns of Iloilo province.

“Nothing much has changed, especially in agrarian reform. The farmers are still poor and landless,” said Joel Gepaya, Alab Katipunan-Panay coordinator.

In Davao City, protesters carried improvised black coffins to represent the victims of political extrajudicial killings in the region.

At least 37 activists, environmentalists and community leaders have been killed in the Davao region under the Duterte administration, according to Jay Apiag, spokesperson for Karapatan-Southern Mindanao.