Legislators on Monday ditched their glamorous gowns to comply with the dress code on the invitation to President Rodrigo Duterte’s second State of the Nation Address (Sona): “Filipiniana or business attire.”

Purple, gold and Muslim-inspired patterns ruled the fashion parade of guests, after many conformed with earlier suggestions to wear Mindanao-sourced patterns as an act of solidarity with those affected by the terrorist crisis in Marawi.

House Deputy Speaker Bai Sandra Sema was the first to arrive on the red carpet, donned in a deep purple headdress and matching printed purple traditional malong made of inaul, a traditional cloth from the South, draped over her torso.

Maguindanao Gov. Esmael “Toto” Mangudadatu followed shortly in a form-fitting long-sleeved purple polo, also made of inaul with gold patterns on the sleeves, collar and around the buttons.

Giving no-frills a lift, fashion designer Randy Ortiz, who made the dresses for at least five female solons, said the Maranao inspiration only applied to the congresswomen.

Sen. Nancy Binay, who was sporting a sleek short bob by hairstylist Jing Monis, wore the same stylized embroidered Ortiz barong top from the morning session to the Sona.

Lawmakers and other government officials who also expressed solidarity with distressed Maranao brothers took to the red carpet in Muslim-inspired creations.

Sen. Loren Legarda, who has long championed indigenous Mindanao culture, came in an antique off-shoulder blouse and a Maranao landap skirt made of woven inaul.

Education Secretary Leonor Briones was in an electric blue baro’t saya with embroidery at the bodice, collar and sleeves. 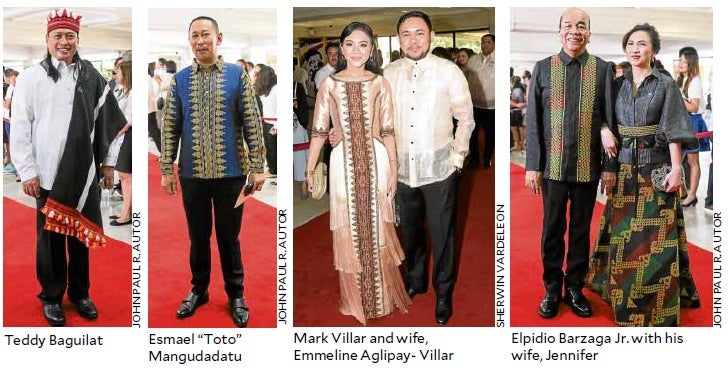 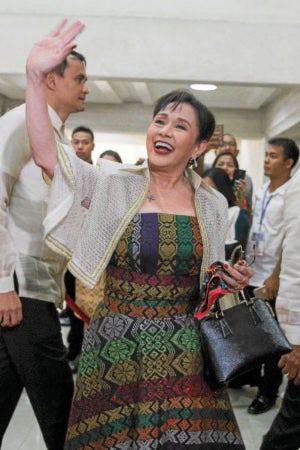 Other lawmakers opted for black and white. Sen. Grace Poe had an off-shoulder white Paul Cabral cocktail dress; Leyte Rep. Yedda Romualdez shined in a Cary Santiago white off-shoulder with a heavily embroidered bodice and a fitting black skirt; and Sen. Risa Hontiveros was in a white Joel Acebuche with elbow-length sleeves.

Cebu Rep. Gwendolyn Garcia sported a short white terno dress by Cary Santiago. The hemline sported a Mindanaoan-print fabric, “an ode to our brothers and sisters in the south,” said its designer.

At the Senate, Jinkee Pacquiao, wife of Sen. Manny Pacquiao, wore a floral embroidered skirt and a top with a Peter Pan collar by Paul Cabral. 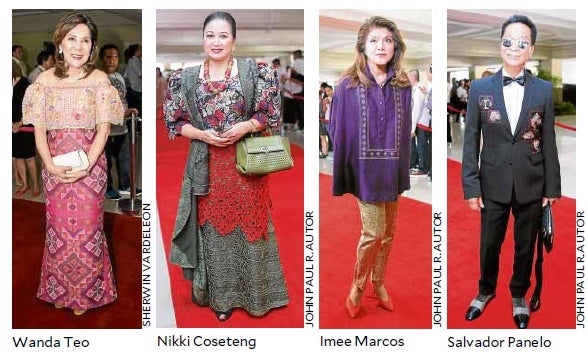 Actress Heart Evangelista-Escudero opted for a white midi full-skirt terno dress by Jo Rubio. For the Sona, she changed into a purple Boom Sason design blouse with gold pattern embellishments and skinny purple trousers, a gold clutch and nude shoes.

Tourism Secretary Wanda Teo wore a multicolored off-shoulder Renee Salud in Mindanaoan fabric. The look was akin to Legarda’s, whose off-shoulder top was paired with a Maranao malong wrap skirt.

Like Teo, Batangas Rep. Vilma Santos-Recto chose a Renee Salud, a column dress of Mindanaoan fabric underneath a bell-sleeve bolero.

Diwa Rep. Emmeline Aglipay-Villar’s Rhett Eala dress sported the designer’s signature trendy fringe detailing on the skirt and accented along the bodice and sleeves with strips of Maranao fabric. It was also trimmed with gold sequins in geometric patterns.

Ito Curata made a rose pink terno dress with a crystal-beaded malong drape accent on the bodice for Batangas Rep. Maitet Collantes.

Shying away from the cameras was the presidential legal counsel, Salvador Panelo, who described his outfit as “pang-Divisoria.”

Read Next
NBI wants NPO officials charged over P73.6-M printing deal
EDITORS' PICK
Connect to PH’s fastest network with new Signature Plan Lite at only P599 per month
Hidilyn Diaz wins weightlifting gold in Tokyo Olympics
Harnessing technology for quality education
Duterte: When I said I will fight drugs in 6 months, I thought it was like in Davao
Duterte warns of possible lockdown if ‘more aggressive’ Delta variant spreads
Tips for a cheerful life
MOST READ
Hidilyn Diaz wins weightlifting gold in Tokyo Olympics
Go to war with China over West PH Sea? It will be a ‘massacre’, says Duterte
Hidilyn shoots not only for gold but also for permanent place in PH sports history
Duterte acclaims Sotto: ‘He can become a good vice president’
Don't miss out on the latest news and information.