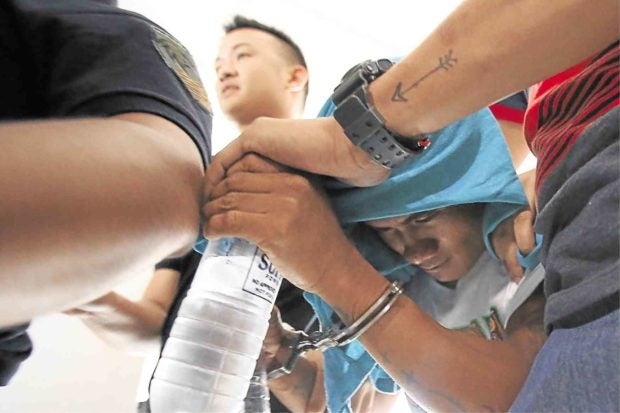 Carmelino Ibanez during his arrest and presentation to media in Pampanga. —NIÑO JESUS ORBETA

CITY OF MALOLOS — Carmelino Ibañez, the lone suspect in the June 27 massacre of a bank security guard’s family, was charged with five counts of murder and one count of rape at the Bulacan regional trial court here last week.

The San Jose del Monte City Prosecutor’s Office filed the charges on Thursday (July 20), almost a month after Dexter Carlos discovered his wife, Estrella, his three children and their grandmother dead from multiple stab wounds at their home in a San Jose del Monte subdivision.

The two women were also sexually molested. Ibañez’s DNA was recovered from samples taken from Estrella’s remains, although his DNA did not match samples obtained from Estrella’s 58-year-old mother, Auring. The children’s grandmother was visiting from Davao City when the family was attacked at dawn.

Chief Supt. Aaron Aquino, Central Luzon police director, said the case was not yet officially closed. The National Bureau of Investigation is pursuing a parallel investigation ordered by the Department of Justice.

Supt. Fitz Macariola, San Jose del Monte chief of police, said among the evidence against Ibañez was a kitchen knife used in stabbing four of the victims.

Police are searching for a second weapon used to kill the fifth victim.

Police built a case against Ibañez in spite of the murder of three persons of interest (POI) who were questioned earlier. Ibañez had implicated POIs Rolando Pacinos and Anthony Rose Garcia as his accomplices in breaking into the Carlos house.

On July 5, gunmen broke into the San Jose del Monte home of a third POI, Rosevelt Somera, and killed him, on the day of the burial of the five Carlos family members.

Macariola said police had continued to investigate the killings of the three POIs. A fourth POI, Alvin Mabesa, had been missing. —Carmela Reyes Estrope