No beer but ‘tapuey’ on Café by the Ruins’ last day 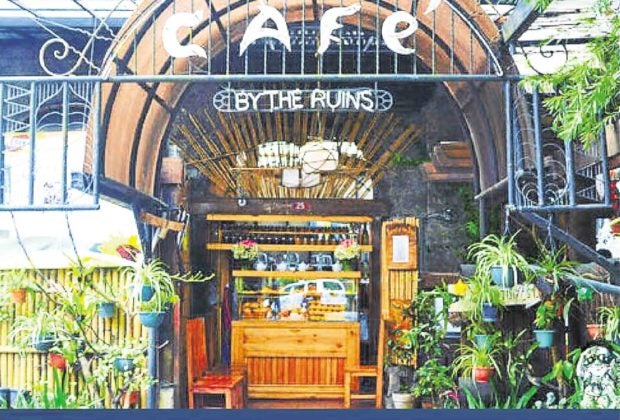 The familiar entrance that greets guests of Café by the Ruins in Baguio City. —PHOTO FROM RJDEXPLORER BLOG POSTED ON CAFE BY THE RUINS FACEBOOK PAGE

A loyal customer on Thursday walked into the Café by the Ruins for the last time, threw her arms around Adelaida “Laida” Lim and uttered the poignant words that reduced Lim to tears: “This is the end of the Baguio salon.”

Lim, one of the Café’s founders, assured the customer that Café by the Ruins, tagged by the Lonely Planet Guide book as “Baguio’s most beloved restaurant,” would return in another place, possibly bigger, better and with another name.

The Café was literally built from the ruins of the house of businessman and former civil governor of Baguio, Phelps Whitmarsh, that remained after World War II.

“The site was originally Baguio’s first Garden Theater dating from the first quarter of the last century. When that business floundered, Phelps Whitmarsh … remodeled the building into his residence. American carpet bombers destroyed the once-cozy house and reduced it to the four reinforced concrete arches that remain,” said Feliz Perez, Lim’s daughter and one of the second-generation managers of the Café.

On April 30 this year, a fire destroyed the “artful café with a wide-reaching menu” (as described by the Lonely Planet Guide). 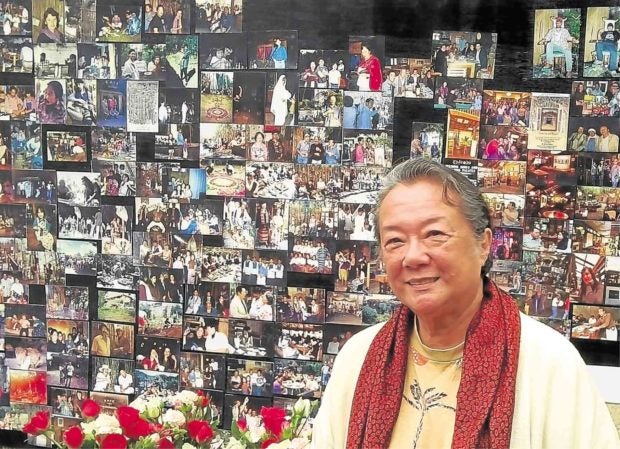 “Our friend is right,” Lim said. “The Café was very much like a Baguio salon where people of all sorts gathered together not only to eat good food but also  to talk about ideas. It was also a place where artists came together and showcased their works.”

The customer was one of many regular patrons, who came in full force when the 29-year-old Café on 28 Chuntug Street across the Baguio City Hall closed on July 20.

Lim echoed the sentiment of her friend and cofounder, the late writer Baboo Mondoñedo, who once wrote that the restaurant would be a venue for community events and would provide food, friendship and information.

“The Café was a kind of guerrilla cultural center which promoted both Cordillera traditional and contemporary culture or a blend of both,” Mondoñedo said in the 2008 book, “Café by the Ruins, Memories and Recipes.”

“Beyond the food, it should be a meeting place where things are discussed and decided. That was the idea,” she said.

The Café fostered the Baguio Arts Guild, a group of artists, including those who made Baguio City their home. It sponsored Mondoñedo’s advocacy to revitalize and popularize indigenous fiber through the Fiber Web movement.

The Café was also the venue for poetry readings by Baguio writers during rainy nights. 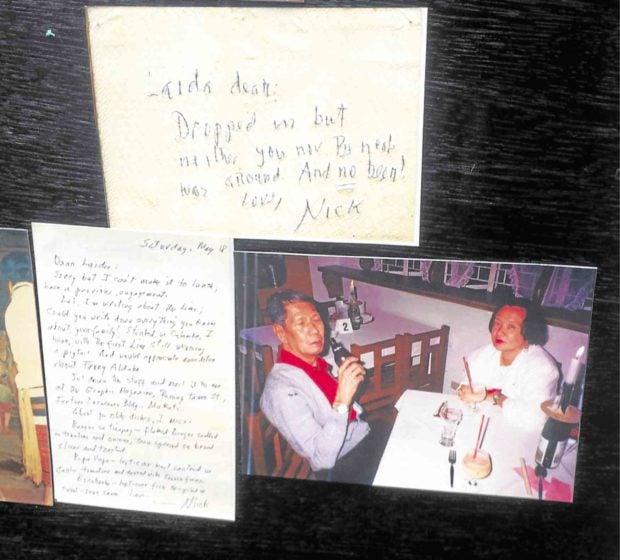 Amemorabilia board features a note of Café by the Ruins visitor, the late National Artist for Literature Nick Joaquin.

One of their friends who would visit the Café whenever he was in the city was National Artist for Literature Nick Joaquin, whose letters and pictures were posted on the restaurant’s memorabilia wall that was exhibited on July 20.

In one photograph, Joaquin was shown behind a table holding a bottle of beer. In a handwritten note to Lim, Joaquin, who was then editor of the Philippine Graphic magazine, mentioned that he missed the Café’s old dishes such as “bangus sa tinapay,” which he described as “flaked bangus sauteed in tomatoes and onions, then spread on bread slices and toasted.”

The sandwich is now called Olde Nick’s Open-faced Sandwich, which has been rated by many customers as the “best tuna sandwich in town.”

During one of his visits, Joaquin wrote on a paper napkin that “neither (Lim) nor Bencab (one of the founders) was around. And no beer!”

The Café never served beer. Instead, it served a local rice brew called “tapuey.” It did not sell bottled soft drinks, too, a conscious decision made by its owners, who offered “salabat” (ginger brew), fresh fruit juices that were in season, milk shakes and lassi (an Indian yogurt-based drink).

“Fresh lumpia filled with mountain-fresh vegetables was always on its menu from Day One. We made sure that we served locally grown food, fresh from the Baguio market. It was our way of supporting our local farmers,” said Lim, who cowrote the Café’s recipe book with her daughter, Feliz Perez, and Feliz’s childhood friend, Lia Llamado. 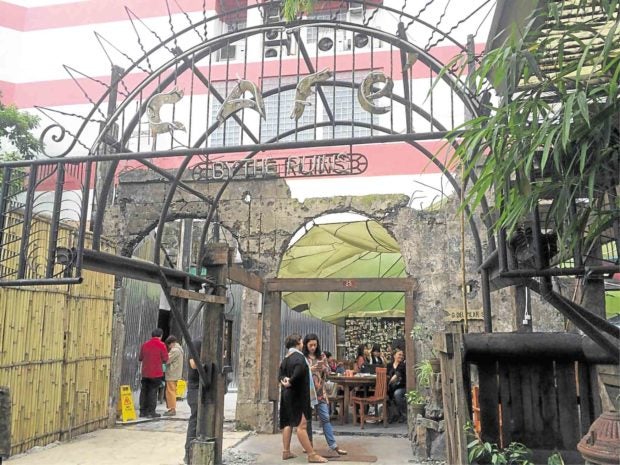 The Café three months after the fire. —PHOTOS BY ROLANDO FERNANDEZ

Lim said the Café was known for its “slow food.” Its specialty food used natural, preservative-free ingredients and was cooked the traditional way.

Guests ordered their “pinikpikan,” a Cordilleran chicken soup which was Mondoñedo’s favorite; fish roe “sarciado;” the Ruins’ “longanisang hubad;” Afable’s green mango “adobo,” which was named after the late Baguio editor Cecile Afable; the Ruins pasta, and many more vegetarian and tofu dishes.

Kamote bread had been the Café’s all-time bestseller and was served to guests on closing day.

Following the July 16, 1990,  earthquake that devastated Baguio, the Café was converted into a soup kitchen which fed thousands of people who camped out at Burnham Park after losing their homes.

“That’s our contribution to the community. We also cooked hot minestrone provided by the Italian embassy, on the days after the quake,” Lim said.

She said they decided not to rebuild the restaurant after they could not reach an agreement with the landlord.

After the “cañao” (Cordillera socioreligious ritual) where two pigs were butchered as a thanksgiving offering, Lim gathered her staff who had worked diligently at the Café for more than 20 years for a final photograph together.

“Today this chapter in the ledger of Café by the Ruins closes. We thank our friends who have become customers and the customers who are now our friends. It’s time to move on,” Perez said.

Read Next
Aklan life beyond Boracay
EDITORS' PICK
Smart offers wireless fiber-like speeds to Filipino homes with country’s first 5G Prepaid Home WiFi
Legarda: Ending Violence Against Women, a cause for all
This new condo in the South will make you want to turn a new leaf
National COVID-19 vaccination drive gets over 5.3 million people vaxxed so far
Pandemic prognosis: Where does it go from here?
Google won’t accept election ads for 2022 national polls
MOST READ
Bongbong Marcos to face another disqualification case
Christine Bersola, Julius Babao cleared of cancer after colonoscopy, endoscopy
‘Maraming nagpapagkamatay sumali’: Bongbong-Sara’s full Senate slate out soon, says Imee
Tropical storm intensifies as it approaches PAR
Don't miss out on the latest news and information.