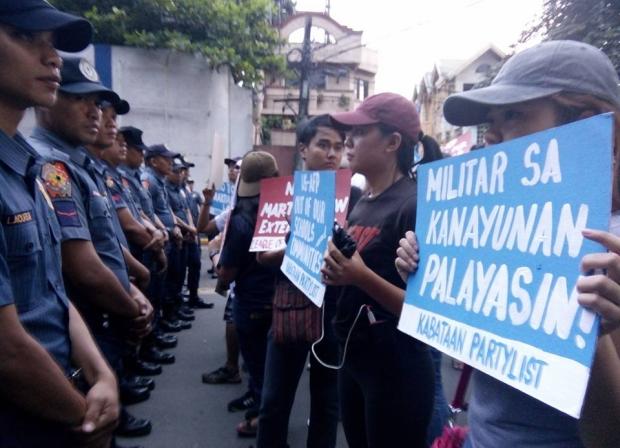 Youth activists gather at Camp Karingal in Quezon City on Saturday, July 22, 2017, to demand the release of eight of their colleagues who were arrested after they staged a lighting rally during the special joint session of Congress to decide on the extension of martial law in Mindanao. (Photo from the Facebook account of the College Editors Guild of the Philippines)

The Quezon City Prosecutor’s Office has recommended that charges be filed against the eight youth activists who held a lightning rally during the Congress joint session tackling the issue on martial law extension on Saturday.

Assistant City Prosecutor Rafael Jaime Mison found probable cause to charge the activists, who were students and teachers, with violation of Article 144 of the Revised Penal Code, or disturbance of proceedings.

Booc, Cadiang, and Guttierez are volunteer teachers at the Alternative Learning Center for Agricultural and Livelihood Development (Alcadev), an alternative learning system in Caraga in Mindanao.

Insp. Leonardo Pasco, general assignments section chief of the Criminal Detection and Investigation Unit of the Quezon City Police District (QCPD), said the recommendation was submitted for approval to the inquest division chief of the QC Prosecutor’s Office.

The resolution would determine whether the arrested protesters could post bail or be released pending further investigation.

Violators of Article 144 may be imposed with a penalty of imprisonment of up to six months or a fine of up to P1,000.

Kabataan Rep. Sarah Jane Elago visited the eight activisit at the QCPD headquarters in Camp Karingal, Quezon City, where they were detained.

Elago, who had the activists as guests of her office for the joint session, called for their immediate release.

“Instead of their dissent being heard, they were met with harassment and arrest,” Elago said. “It shows how the Duterte administration is truly hellbent on enacting martial law.”

The arrested activists, who carried banners and chanted against martial law during the interpellation, will remain behind bars until the resolution is issued, which will likely be next week.

Congress overwhelmingly voted in approval of the extension of martial law in Mindanao until Dec. 31. /atm