‘Red-tagging’ of lumad worsens under martial law in Mindanao 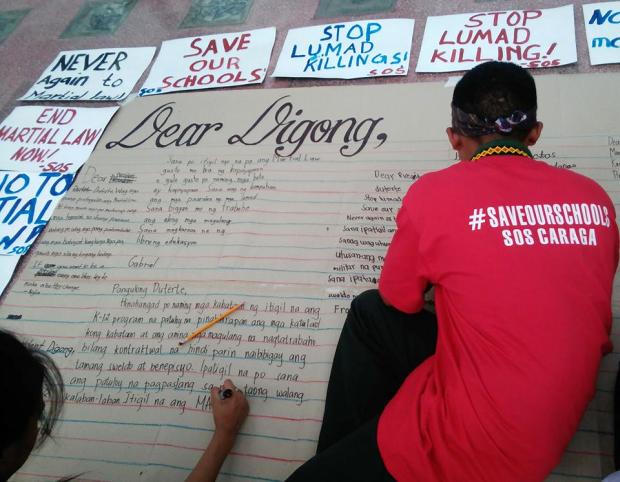 Participants in a letter-writing activity held at University of the Philippines in Diliman in Quezon City on Satuday, July 22, 2017, air their protests over martial law and its extension. The activity was organized by the Salinlahi Alliance for Children’s Concerns. (Photo from the Facebook account of Salinlahi)

Even before President Rodrigo Duterte declared martial law in Mindanao, the Manobo community in Lianga, Surigao del Sur, to which 13-year-old Dimlester Dumanglay belongs, has long suffered being targeted in counterinsurgency operations.

“Lumad” is a Cebuano word meaning “native,” used to refer to indigenous people.

The Magahat-Bagani, the residents alleged, were on the hunt for communist New People’s Army members and sympathizers, allegedly under the auspices of the military. The attack prompted the almost year-long evacuation of residents from their homes.

Dumanglay, a sixth grade student of a lumad alternative school run by nongovernment organizations, said there was no truth to the perception that they were attending “NPA schools.” But in the first year of the Duterte administration, especially since the President declared martial law in Mindanao, the red-tagging had gotten worse.

“They filed complaints against our teachers, accused them of trafficking and child abuse. Those aren’t true. Those complaints shouldn’t be continued, because our teachers only teach us the truth,how to read, write, and count,” Dumanglay insisted, in heavily-accented Tagalog.

Inquirer interviewed Dumanglay during a “letter-writing activity” organized on Saturday by the Salinlahi Alliance for Children’s Concerns at the University of the Philippines in Diliman, so lumad and urban poor youth could air their protests over martial law and its extension.

The only unique feature in their school, Dumanglay said, was its emphasis on agriculture, but the usual subjects of Filipino, English, Science, Math, and Sibika were also being taught.

“They just call it an NPA school because it’s for free,” Dumanglay said. “But the government never gave us a school. Now that we have one, they’re trying to take it away because they don’t want us to realize the real situation, or to wisen up and fight for nature and our ancestral lands against the lure of wealth and businesses.”

“They should be upholding our rights, supporting free education for us,” Dumanglay said. “Instead, they want us to leave our communities. So many have already been killed. We don’t have rights anymore. Only the military have rights under martial law.”

During the Salinlahi letter-writing activity, Dumanglay said he wrote that he hoped Duterte would lift martial law because it was “not the solution to conflict.”

“It’s not the NPA or the Maute group that’s getting bombed, it’s civilians,” the student said. “That’s why the extension of martial law is making me nervous. I hope they take pity on us.”

“What people want are to be able to eat three times a day, to have education, to have their own land, to be able to choose for themselves,” Dumanglay said.

Dumanglay lamented that his community voted mostly for Duterte.

“He promised so much to us lumad,” he said. “He promised change. But what change is this? The killing of Filipinos?”

No less than Duterte, in a recent speech lambasting communist leader Jose Maria Sison, taunted the lumad to stop supporting Sison and to join the military instead.

“Red-tagging the lumad isn’t new,” Salinlahi Secretary General Eule Rico Bonganay said. “What is alarming now is that it is the President himself that is doing it.”

“The military will capitalize on that. That’s like a blanket protection for impunity,” Bonganay added.

In a press conference in Quezon City last week with rights group Karapatan, Michelle Campos, daughter of slain lumad leader Dionell Campos, said 2,046 people and 443 families from 16 communities in Lianga, San Miguel, and San Agustin towns have evacuated again following the arrival of more soldiers and reported sightings of “bomber planes” in their community since July.

Under martial law, Campos said, teachers of alternative lumad schools are now facing arrest, evacuees and residents are being asked for IDs at military checkpoints, evacuees are taken photos of everytime they come down from the evacuation site, and donations to evacuees are allegedly blocked by the military “because they said they may just be given to the [communist] New People’s Army.”

“Declaring martial law over the entire Mindanao is questionable, because they’re just looking for the terrorists in Marawi City,” Campos said tearfully in Filipino. “They say they’re also looking for the NPA in Mindanao, but why is the military targeting us, the civilians?”

“The lumad are dismayed because during the elections, we truly 100-percent supported [Duterte] because we thought if he becomes President, having come from Mindanao, he would understand our feelings and our appeals,” she added.

In 2014, then Davao City Mayor Rodrigo Duterte, as chair of the southern Mindanao peace and order council, signed an agreement with the military which barred troops from holding camp in a lumad community in Talaingod, Davao del Norte, facilitating the return of evacuated lumad to their homes.

“But now, under his administration, the military treats the people worse,” Campos said.

“[Duterte] shifted positions so quickly: from pro-lumad to militarist, fascist,” Bonganay said, recalling that in 2015, Duterte had even called for the pull-out of Army units in lumad communities under the Aquino administration.

Ironically, “the biggest casualties of martial law are the lumad, even the Moros” in Mindanao, Duterte’s home region, Bonganay said.

Lumad advocacy group Save Our Schools Network, through allies in the leftist ACT Teachers’ party list and Gabriela Women’s Party, filed House resolutions seeking to investigate around 68 incidents of “military attacks” in 89 lumad schools from July 2016 to July 2017, which the group claims had worsened since martial law was declared over the entire Mindanao region last May 23.

This includes the offering of a P5,000 reward for information on teachers of an alternative school in Palimbang, Sultan Kudarat.

Michael Fay, one of those teachers, said of out of their 52 schools, the local governments which kept accusing them of being “rebel bandits” already had 20 schools closed once martial law was declared.

“If martial law is extended, there will be more school closures,” Fay said.

SOS Network said 80 percent of such attacks happened in southern Mindanao, which is the Davaoeño President’s home region. /atm