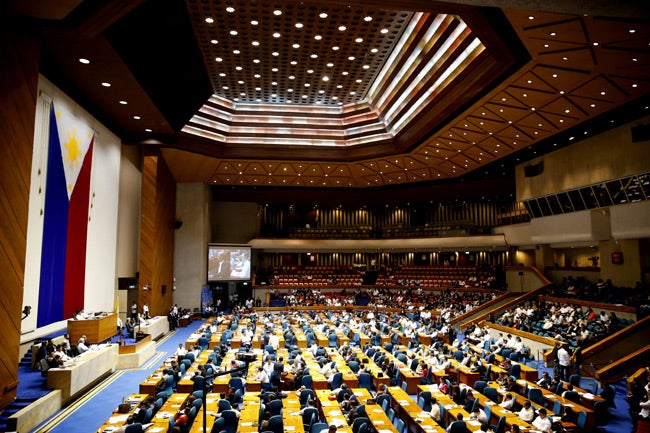 Congress gathered in a special joint session to decide on the proposed extension of martial law in Mindanao on Saturday, July 22, 2017. Martial law was declared by President Rodrigo Duterte last May 23, for 60 days following the siege by Muslim militants of Marawi city which is now on its second month. (Photo from AP)

Members of the left-wing Makabayan bloc begged to differ during interpellations during the special joint session of Congress on Saturday.

In her party’s interfaith humanitarian mission, Brosas said there had been forcible evacuations and other killings even outside Marawi City.

She cited “extrajudicial killings” in Maguindanao due to “indiscriminate” aerial bombing and mortar shelling.

One case of forcible evacuation on May 22 also affected 1,248 families.

In Matan-ao, Davao del Sur, there was a reported case of extrajudicial killing, and forcible evacuations also affected 1,187 families.

Brosas also cited one case of frustrated murder threats and 187 cases of harassment and intimidation.

“How can we say the military in Mindanao are acting for the sake of ensuring the safety of the public when things like these are happening? Where do we get redress for such violations for the military’s victims?” she told her colleagues at Congress. “Does the military even record the number of civilians killed in these clashes? Does the executive have any mechanism to ensure that civilians were not affected in these neutralizations by the military?”

Meanwhile, Kabataan Rep. Sarah Jane Elago said her party had submitted a report to President Rodrigo Duterte himself about the “successive violations of human rights.”

She counted 68 victims of political killings, 842 victims of illegal arrests, at least 416,000 displaced individuals, and 357,659 victims of indiscriminate gunfire and airstrikes, including those affected by bombings in Marawi and the provinces of Cotabato, Bukidnon, Davao del Sur, and Davao del Norte.

Speaking of the displaced residents of Marawi City, he said: “Aren’t the thousand of bakwits [evacuees] living proof that their human rights have indeed been violated already?”

Even far away from the epicenter of the conflict in Marawi, Casilao cited the thousands of lumad youth who were forced to evacuate by the military in Lianga, Surigao del Sur and in Talaingod, Davao del Norte.

He said 37 lumad schools were forcibly closed down due to martial law, affecting about 3,000 indigenous people.

He cited witnesses who reported that military personnel accused the indigenous peoples of being sympathizers of the New People’s Army: “We are the government. You are supporters of the NPA, we’ll shut you down.”

“It is very impossible to say there’s zero violations of human rights,” Casilao stressed. “The ones creating this fear for public safety are the very ones who implement it [martial law].”

Gabriela Rep. Emerenciana de Jesus was scathing in her assessment of the implementation of martial law.

“We are saying the current regime is not corrupt. That is bothersome,” she said. “Corruption of values, corruption of things that should not be happening, that are becoming natural, that are becoming the norm. This is a huge issue, and as Congress is given the power to have its joint session today, I want to point to the damage caused to our countrymen in the past 60 days.” /atm