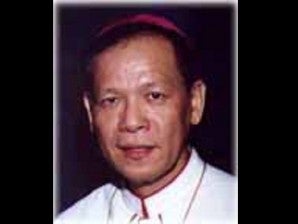 CEBU CITY, Philippines – Pope Benedict XVI has named a vocal opponent of the reproductive health bill as new leader of the archdiocese of Capiz Archdiocese.

The new assignment of Bishop Jose F. Advincula, 59, of the diocese of San Carlos City, Negros Occidental, was announced in a statement released by the Vatican Information Service on its website www.news.va on November 9.

He will succeed Archbishop Onesimo Cadiz Gordoncillo, who resigned when he turned 75 in February. The date of the new archbishop’s installation was not indicated in the statement.

Canon or church law stipulates that bishops should tender their resignation to the Pope upon turning 75 years old.

The archdiocese comprises the whole province of Cadiz and Roxas city as well as the satellite dioceses of Kalibo and Romblon.

Advincula will be the third archbishop of Capiz.

The archbishop’s installation will be a sweet homecoming since he is native of municipality of Dumalag, Capiz. Bishops are rarely appointed to lead their home dioceses.

Last Holy Week, Advincula called on Catholic politicians who proposed the RH bill to reflect and change their stand. Last year, he stood witness to the historic signing of a covenant for a peaceful campaign period and elections by contenders for office in Escalante City, Negros Occidental.

He finished high school and philosophy at  St. Pius X Seminary, Laaw-an, Roxas City, and theology at  the University of Santo Tomas  Central Seminary in Manila. He earned a master of arts degree in guidance and counseling from the De La Salle University in 1983 and subsequently studied canon law at  UST and in Rome.

He is currently a member of the Catholic Bishop’s Conference of the Philippines permanent commissions on Women, Family and Life, Indigenous Peoples and Doctrine of the Faith.