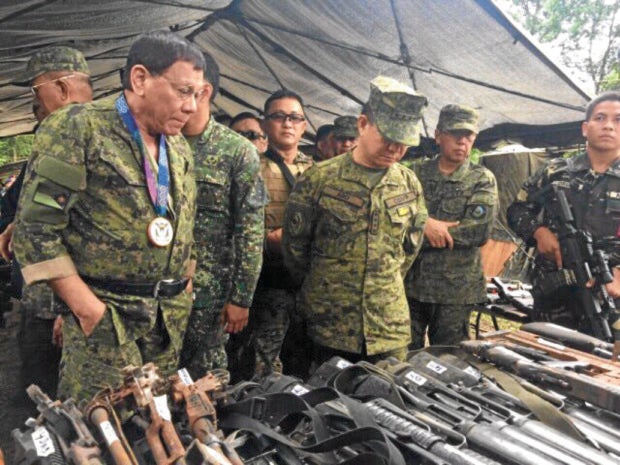 MARAWI CITY—After several attempts starting in June, President Duterte finally set foot in war-torn Marawi on Thursday and got to thank his troops for their heroism in fighting Islamic State-inspired terrorists holed up in the city.

Mr. Duterte’s visit, however, was confined to the military’s Camp Ranao here.

Mr. Duterte arrived by helicopter around 2 p.m. and immediately proceeded to inspect some 400 firearms that government forces had recovered since the crisis here started on May 23.

He then talked to the soldiers and gave them gifts, including watches.

The President spent about four hours in the military camp,  which is just across the provincial capitol, unnoticed by most people, even journalists.

Lt. Col. Jo-Ar Herrera, spokesperson for the Joint Task Force Marawi, told reporters later that Mr. Duterte hailed the troops for their heroism “in spite of the challenges” they faced in fighting the Maute and Abu Sayyaf terrorists.

“We saw how the President supported us in this campaign. He showed how he supported our soldiers who have been fighting for Marawi,” Herrera said.

At least 99 soldiers have died in the fighting and nearly 900 other troops have been injured since the fighting erupted after the terrorists, waiving black Islamic State (IS) group flags, stormed the city on May 23.

Mr. Duterte had been repeatedly trying to visit the troops since June to give them a morale boost.

The closest he got to Marawi was on July 7 when he visited the headquarters of the Army’s 2nd Mechanized Brigade in Barangay Maria Cristina in Iligan City,  27 kilometers to the north.

Herrera said that after several tries, the President finally made it to the city on Thursday and got near the front line.

The war zone is only about 3 kilometers from the military camp in the city.

Mr. Duterte told Congress in a letter earlier this week that even though troops had regained control of much of Marawi and killed hundreds of militants, “the rebellion persists and a lot more remains to be done to completely quell the same.”

The terrorists’ leadership, he said, remains largely intact and has funded diversionary attacks on other southern cities.

The seven-page letter, a copy of which was seen by reporters on Thursday, aims to convince lawmakers to extend Mr. Duterte’s 60-day declaration of martial law in Mindanao up to  the end of the year.

The statements in the letter appear to differ from his assurance last week that the Marawi crisis, the most serious he has faced so far, could end in 10 to 15 days.

In a separate report to the Senate, the military said the Maute terrorists’ Abu Sayyaf ally, Isnilon Hapilon, “allowed the escape of 96 young recruits fighting in Marawi and instructed them to continue jihad outside Marawi.”

Jihad is an Arabic word that militants use to refer to “holy war.”

Officials say at least 565 people, including 421 militants and 99 soldiers and policemen, have been killed in the worst urban uprising by Muslim terrorists in Mindanao in decades.

Nearly half a million residents have been displaced in Marawi and outlying towns by the fighting.

Mr. Duterte wrote in his letter that the leadership of the Marawi siege “largely remains intact despite the considerable  decline in the number of rebels fighting in the main battle area.”

Intelligence reports that Hapilon sent funds and ordered allied militants to launch attacks in key cities across Mindanao have been validated, he said.

The attackers’ lasting power and large arsenal of weapons have surprised Mr. Duterte and his top security officials, who acknowledged that they underestimated the combat strength of the terrorists and their preparations, including the stockpiling of assault firearms in lakeside Marawi.

Troops long used to fighting insurgents in the jungles have struggled to rout the terrorists from Marawi’s dense urban sprawl.

Despite the large number of troops and checkpoints around the city, “there have been reported entries of reinforcements, weapons, ammunition and other logistical supplies from outside Marawi City through clandestine routes,” Mr. Duterte told the lawmakers.

Followers of local politicians have backed the siege, which was partly funded by drug money, he said.

The crisis has sparked alarm that the IS group may be gaining a foothold in Southeast Asia, through allied local militants, as it faces major setbacks in Syria and Iraq.

The United States and Australia have deployed surveillance planes to Marawi, and China has provided weapons for Filipino troops, including those fighting in the besieged city. —WITH A REPORT FROM AP