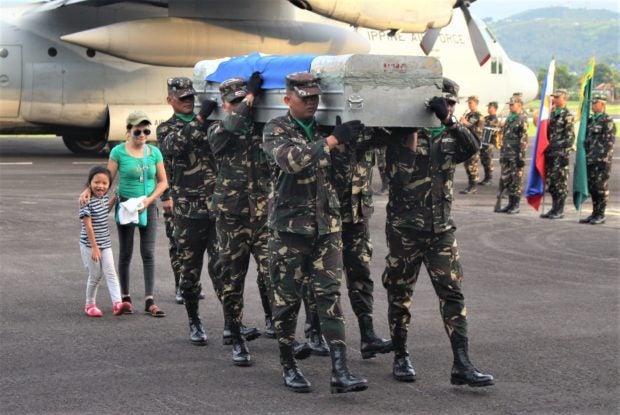 Soldiers carry the coffin containing the remains of Army Sergeant Antonio Pareja, as it arrives in Legazpi City, Albay. Pareja will be interred in Tiwi, Albay, his wife’s hometown. Pareja was one of the two soldiers who were killed by friendly fire in Marawi City, on July 12, 2017. (PHOTO BY GEORGE GIO BRONDIAL / INQUIRER SOUTHERN LUZON)

LEGAZPI CITY, Albay — Army Sergeant Antonio Pareja, one of the soldiers killed by friendly fire in Marawi City, came home to his wife and mother in Albay on Thursday afternoon.

The slain soldier was given arrival honors by his comrades at the Tactical Operation Group 5 in Legazpi City Airport at around 5:45 p.m.

Pareja, who was a native of Bislig town in Surigao del Sur and a member of the Scout Ranger Company under the 4th Battalion of the Philippine Army based in Lanao del Sur, was in service for 15 years
his mother Erlinda said.

“His cadaver was brought here in Albay because his wife hails from Tiwi town and the family requested that his body be buried there,” she said.

She said she was not blaming the Armed Forces of the Philippines for what happened to her son. To her, the important thing was he died serving the country.

“It is very painful. How I wish all terrorists are dead, too,” she said.

“The whole country is very proud of him. He was in Marawi because he
was fighting for our freedom against the terrorists,” he said.

Pareja was one of two soldiers who were killed last July 12 in Marawi City, when a bomb landed 250 meters off target.  Eleven other soldiers were wounded.  The Armed Forces of the Philippine has launched an investigation into the fatal error.  SFM