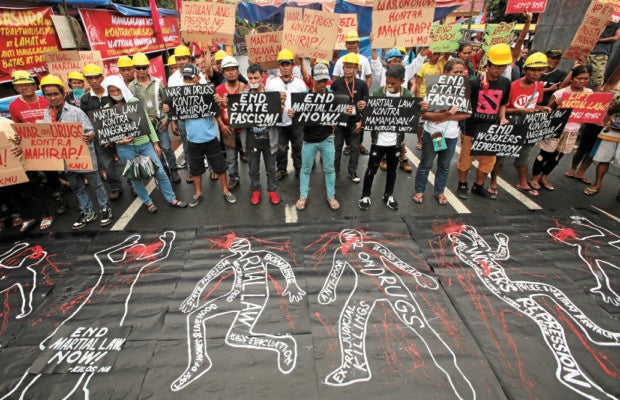 NO EXTENSION Militant workers hold a rally on Mendiola Street, Manila, on Wednesday to protest President Duterte’s request to Congress to extend martial law in Mindanao up to the end of the year. —GRIC C. MONTEGRANDE

Most senators emerged from a lengthy security briefing on Wednesday convinced that there was a need for an extension of martial law in Mindanao but divided on President Rodrigo Duterte’s proposal to stretch it until the end of the year.

Senate Minority Leader Franklin Drilon said the senators in general were supportive of the requested extension but he anticipated that the length and coverage would be the focus of the debate at the special joint session of Congress on Saturday.

“I am inclined to support the extension of martial law after the briefing but in so far as the length and the coverage, let’s debate,” Drilon told reporters.

He said senators commended the Armed Forces of the Philippines for implementing martial law in Marawi City and the rest of Mindanao without incidents of “any significant” human rights violations and abuse.

“In that sense we want to commend and we continue to support them. In fact, I’ve proposed in the meeting that maybe we should come up with a supplemental budget specifically for the rehabilitation of Marawi City and in support of our AFP,” Drilon said.

The security briefing, led by Defense Secretary Delfin Lorenzana, AFP Chief of Staff Gen. Eduardo Año and National Security Adviser Hermogenes Esperon, was held in an executive session in the Senate three days before Congress was to vote jointly on the request to extend martial law until Dec. 31, 2017.

“The way I look at it when it comes to the extension, majority would support but the number of days or months … it is still questionable. We will seriously study it,” said Sen. Joel Villanueva.

“We requested from the security officials to present more information at the joint session so it will be clearer to us whether there’s a need to extend until December,” said Sen. Grace Poe.

Sen. Richard Gordon said he was supporting an extension but only for 60 days. “I go on the side of due diligence … but we will let them explain why we should extend it [until the end of the year],” he said in a separate interview.

Sen. Miguel Zubiri favored the extension of martial law in Mindanao until the end of the year. “I think five additional months is more than enough at the same time sufficient enough to be able to weed out this armed elements,” Zubiri told reporters.

President Duterte has officially sought congressional approval of the extension of martial law in Mindanao until the end of 2017 in a July 28 letter to the House of Representatives explaining the gravity of the crisis in Marawi City that is threatening to spill over to the rest of the troubled region.

He warned of possible attacks being launched in Basilan, Cagayan de Oro, General Santos City and Zamboanga City, as well as bombings in “vital areas” in Mindanao, including Lanao del Norte.

Mr. Duterte, who is trying to convince lawmakers to extend his Proclamation No. 216 by five months, said terrorist elements and rebels were getting reinforcements from local and foreign sympathizers with links to the Islamic State (IS) jihadist group  in the Middle East.

In the letter to Speaker Pantaleon Alvarez and Senate President Aquilino Pimentel III released to the media by House Majority Leader Rodolfo Fariñas, the Commander in Chief disclosed details of escalating hostilities between government forces and armed militants led by the Maute Group and Abu Sayyaf.

Mr. Duterte said he came to the conclusion that the rebellion in Mindanao would not be quelled completely by July 22, the last day of the 60-day period of martial law mandated under the 1987 Constitution.

“The request of the President is very reasonable, justifiable. And since he knows a lot of things, I believe that we should give him the benefit of the doubt,” Justice Secretary Vitaliano Aguirre II told reporters.