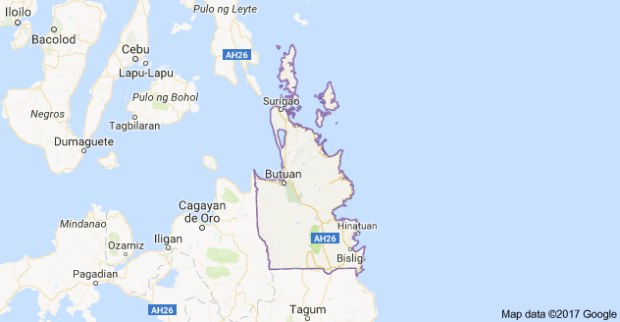 SAN FRANCISCO, Agusan del Sur — Communist guerillas on Wednesday, claimed responsibility for the series of attacks in Caraga region on Tuesday, saying they were protesting the imminent extension of martial law in Mindanao until the end of the year.

Ka Ariel Montero, the spokesperson of the New People’s Army Regional Operational Command, said in a statement the offensives included the disarming of Vice Mayor Emmanuel Suarez of Cortes town in Surigao del Sur around 6 a.m. The rebels carted away two .45-pistols, a shotgun, a sub-machine gun, two grenades, a VHF radio and bullets for a.45-pistol.

Montero said from noon of the same day until 3 p.m., the NPA’s Front 19 attacked the Dole-Stanfilco banana plantation in Tago, also in Surigao del Sur, where they destroyed some six hectares of banana farm and torched the company’s six mini-trucks.

In Surigao City at 9 a.m., the NPA’s Front 16 torched the equipment and vehicles of Mamsar Construction, including a forklift, backhoe and multi-cab cars.

In Butuan City later in the evening, the NPA’s Front 21 killed militiaman Oning Lumacang, a resident of Anticala village for his alleged involvement in anti-insurgency offensives. Montero said Lumacang was once an NPA cadre who left without the consent of the rebel group and brought with him firearms.

Montero said the punitive action against Dole-Stanfilco was for the company’s alleged continued grabbing of farmlands of poor farmers and the use of chemicals for aerial spray that has damaged the environment and the health of the populace.

He added they also burned down the company equipment and vehicles for the company’s failure to recognize and follow the revolutionary policies like providing workers with benefits.

The statement pointed out that the series of offensives were necessary to protect the interest of the masses and the revolutionary movement from  the “ferocity” of martial law declared by President Duterte and the all-out military offensive under Oplan Kapayapaan.

Reacting to the incidents, the Surigao del Sur police condemned the NPA attacks, saying the NPA only succeeded in sowing terror and fear among innocent civilians.

“Is this what they boast about as soldiers of the masses? To rob properties and instill fear in civilians? And when their demands are not met, they just burn down hard-earned properties of residents?” a statement issued by Surigao del Sur police office read.

The police also called on residents of the province to immediately call its hotline numbers if they have any information about the presence of communists guerillas in their communities. SFM