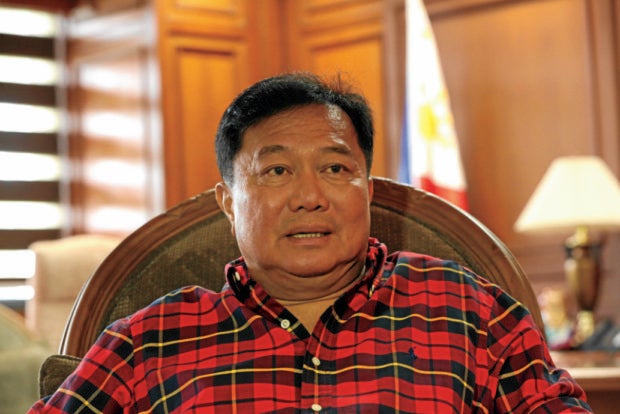 The House of Representatives can pass the proposed Bangsamoro Basic Law (BBL) “before Christmas” provided it does not violate the 1987 Constitution, according to Speaker Pantaleon Alvarez.

“I have not read the draft but if there are no problems with the Constitution, we can pass it in the House of Representatives immediately. We can finish it before Christmas,” Alvarez said, referring to the bill that would establish a new, more powerful Muslim autonomous region in Mindanao.

In a radio interview on Tuesday, Alvarez said the 294-seat House would deliberate on the proposed BBL simultaneously with the proposed P3.767-trillion budget for 2018, which would be at the top of the legislative agenda in the next few months.

On Monday, government and Moro rebel representatives submitted to President Rodrigo Duterte a new draft of the BBL, in a fresh iteration of the longstanding effort to bring peace to war-torn Mindanao.

The draft was the second produced by the Bangsamoro Transition Commission after the first one failed to clear Congress under the administration of President Benigno Aquino III.

The commandos managed to kill top Malaysian terror suspect Zulkifli bin Hir, alias Marwan, who had long been wanted by the United States, but the large number of police deaths sparked public outrage and prompted lawmakers to stall passage of the autonomy bill.

“These misguided people have filled the vacuum created by our failure to enact the basic law and fed into the frustration of our people,” Murad said at the ceremony in Malacañang for the submission of the new BBL bill to Mr. Duterte.

“Today, we watch with utter disgust at the destruction that violent extremism has inflicted in the city of Marawi,” Murad said, referring to the 2-month-old fighting between government forces and Islamic State-inspired terrorists who seized the city on May 23 to establish an enclave for the Middle East-based jihadist group in Southeast Asia.

The fighting has reduced much of Marawi into rubble and killed more than 500 people, including 92 soldiers and police and 45 civilians.

Once established, the autonomous body, called Bangsamoro, “would be at the forefront of keeping public order and safety, dispensing justice within the bounds of law and addressing the basic requisites of a good life,” Jaafar said.

Mr. Duterte pledged to back the new BBL as long as it adheres to the Constitution and promotes solutions to the plight of minority Muslims.

“I am for this,” Mr. Duterte said to applause from officials and the insurgents, who came to Malacañang in business suits.

“Within the context of the Republic of the Philippines, there shall be a Bangsamoro country,” he said.

In a speech to Marawi evacuees in Iligan City three weeks ago, Mr. Duterte promised to ask Congress to pass the proposed BBL, which, he said, could serve as a template for the Philippines’ switch to federalism.

Alvarez, in his radio interview, said he talked with Senate President Aquilino Pimentel III on Monday about the possibility of Congress forming a body that would draft a new Constitution as part of the federalization move.

He said Congress might as well take the initiative to appoint the members of a constitutional commission, since the executive had not made progress in the creation of the body.

“The constitutional commission would act as a technical working group to study and draft the revised Constitution, which would replace our system of government [with] a federal form of government,” Alvarez said.

Then, he added, Congress, sitting as a constituent assembly, would debate the merits of the draft Constitution, which, once approved, would be submitted to the people for approval in a plebiscite after a massive information drive.

Alvarez said Congress might be able to sit as a constituent assembly by January or February next year. —With a report from AP