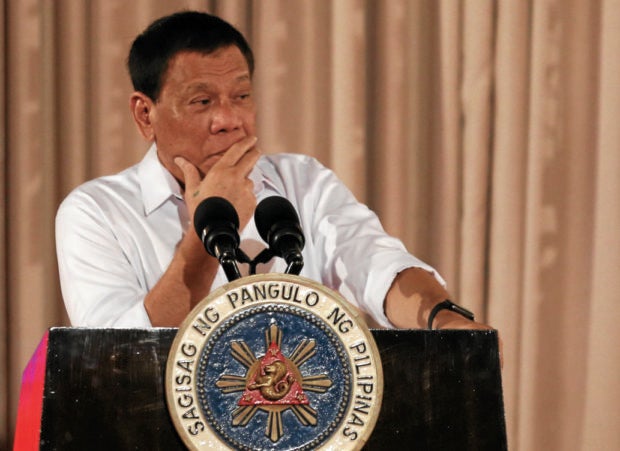 ‘PEOPLE GET THE PRESIDENT’ Malacañang says the people get the President who, in turn gets
the people—and that’s why his approval and trust ratings are high. —JOAN BONDOC

A year into his term, President Rodrigo Duterte continued to enjoy high approval and trust ratings among Filipinos, according to the latest Pulse Asia survey.

Results of the survey, conducted from June 24 to 29, showed that the President’s overall approval and trust ratings and those of four other top government officials—the Vice President, Senate President, House Speaker and Chief Justice—increased between March and June.

In the Pulse Asia survey that covered 1,200 adults, he also recorded high trust of 81 percent, up from 76 percent.

Presidential spokesperson Ernesto Abella welcomed as “pleasant news” the high approval ratings of Mr. Duterte, saying the President “gets” the people who in turn “get” him.

Abella said a majority of the people, especially the masses, “really get (the President).”

“There are those who, of course, tend to zero in on certain details. But as far as the public is concerned, . . . they find the President as somebody who understands them, who has their common interest, the common good, at heart.

Abella said Mr. Duterte would not claim for himself the high approval rating. “He will give due credit to his Cabinet and to the participation of all agencies,” he said of the President.

The majority across geographic areas expressed approval of Mr. Duterte’s performance (75 percent to 95 percent) and trust in him (73 percent to 97 percent).

In all socioeconomic classes, he also enjoyed big majority approval (79 percent to 84 percent) and trust (77 percent to 85 percent) ratings.

Alvarez’s approval rating went up to 43 percent from 40 percent. His trust rating rose to 41 percent from 37 percent. 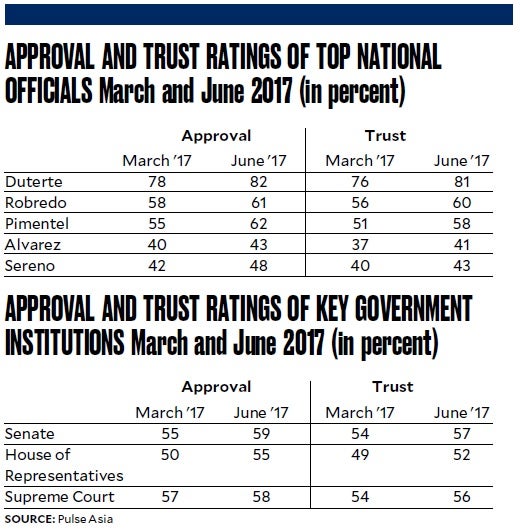 Sereno had a 48-percent approval rating, up from 42 percent.

She scored a 43-percent trust rating, up from the 40 percent.

The poll also found that the Senate (59 percent), House of Representatives (55 percent) and the Supreme Court (58 percent) had majority approval scores.