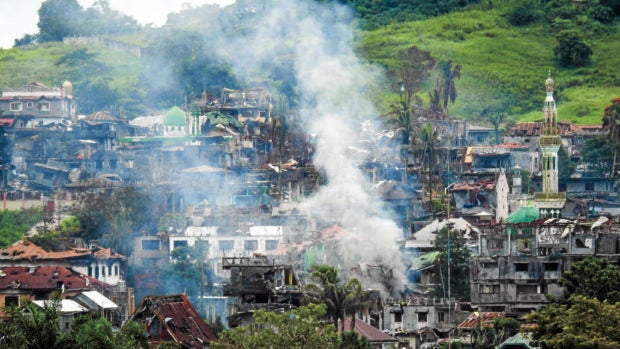 Smoke billows from burning houses as fighting between government troops and Islamist militants continues in Marawi on the southern island of Mindanao on July 3, 2017. (AFP FILE PHOTO / FERDINANDH CABRERA)

MARAWI CITY — The military continued dropping more bombs, rockets and mortar fires at the remaining positions of Islamic militants in this war-torn city.

Herrera said more than 500 buildings occupied by Maute and Abu Sayyaf were up for clearing by soldiers, as of Monday.

“We are gaining more ground. The rebel-held area is getting smaller. We are committed and focused to finish the job as soon as possible,” Herrera said.

He said some 511 firearms were also recovered from the enemy, while 1,723 civilians have been rescued in the last 56 days of violence here.

“It has come to our attention that some groups and individuals are alleging that there are cases of human rights abuses under martial law but have largely remained unreported. Don’t be afraid. If indeed some of our soldiers are found guilty of committing excesses under martial law, then we will not hesitate to administer the appropriate sanctions against these individuals, while ensuring that due process is followed,” Lorenzana said in a statement.

“We will never allow anyone within the defense and security establishments to tarnish the good image and reputation that we have painstakingly built over the years,” he added.

He said that as a measure to prevent any potential excesses or mishandling by the armed forces, “we have actually deployed AFP human rights officers and lawyers on the ground to help guide our soldiers in performing their expanded duties and responsibilities under martial law.”  SFM