Day One of Jinggoy Estrada’s trial for plunder | Inquirer News

Day One of Jinggoy Estrada’s trial for plunder 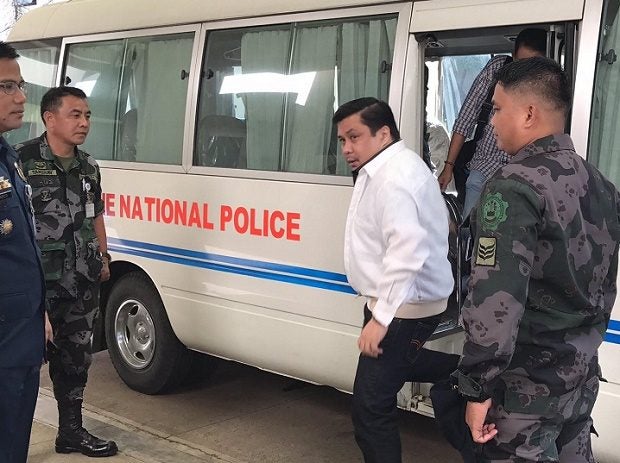 Former senator Jinggoy Estrada steps out of the police van that brought him to the Sandiganbayan on Monday, July 17, 2017, for the first day of the trial for his plunder case. AIREI KIM GUANGA,  INQUIRER.net intern.

Former senator Jinggoy Estrada has arrived at the Sandiganbayan for the first day of the trial of his pork barrel plunder case.

The trial finally started after the defense and prosecution panels agreed that documents offered as evidence were faithful reproductions of the originals, ending the pre-trial phase.

The pre-trial limits the issues to be taken up during the trial proper.

He has been denied bail and remains in police custody with co-accused Sen. Ramon Revilla Jr. at the Philippine National Police Custodial Center. Revilla’s plunder trial has also begun.

Another accused, Sen. Juan Ponce Enrile, has been allowed by the Supreme Court to post bail for humanitarian considerations.

Estrada is also accused of 11 counts of graft for violating Section 3(e) of the anti-graft law for allegedly causing injury to government and giving undue preference to Napoles’ bogus foundations to implement his ghost pork barrel projects.