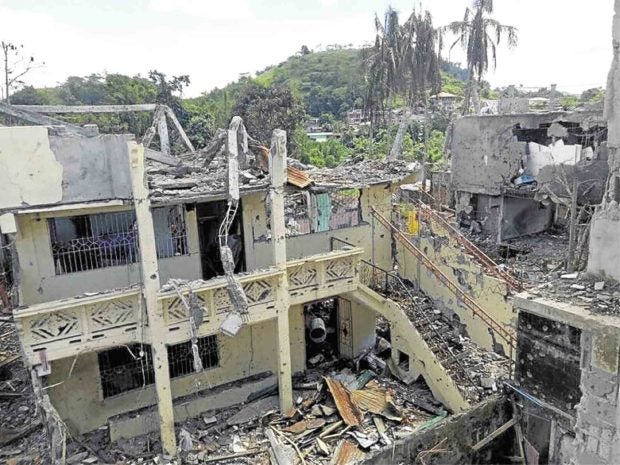 IN RUINS: What remains of Marawi after a month of fighting. (PHOTO BY JOSHUA MORALES/RADYO INQUIRER)

A group of women, weary about their lives in evacuation sites, has expressed plans to return home to Marawi City on July 24, the day President Duterte will deliver his second State of the Nation Address (SONA) in Congress.

Presidential Spokesperson Ernesto Abella said on Sunday, the Palace understood “the sentiments of the residents of Marawi wanting to return home after being forced to flee from the city.”

But Abella expressed the government’s concern over their safety, especially the women and children, in returning to the city which had not been cleared of the remaining Islamic State-inspired fighters from the Maute Group which had attempted to seize control there almost two months ago.

“There is no assurance that areas outside the main battle zone are already safe to reside and live in, as incidents of cases of stray bullet victims have been reported. In addition, the clearing of the entire city of Marawi of IEDs and booby traps left by terrorists, unexploded ordnance  and other explosives is still ongoing. The danger and risks these pose still remain high,” he said in a statement.

“For the safety of everyone, it is better to just wait for the end of hostilities and the completion of clearing operations,” Abella said.

President Duterte has declared martial law on the entire Mindanao in a bid to quell the Maute Group’s attacks in Marawi City, the 60-day period set to expire on July 22.

This as the majority bloc senators led by Senate President Aquilino Pimentel III are set to meet with President Duterte Monday night to discuss the conflict in Marawi City.

Senate Majority Leader Vicente Sotto III said he did not know exactly who among the senators were invited in the Palace meeting which he added had no specific agenda.

Sotto said he planned to raise with Mr. Duterte the need to amend the Human Security Act to further protect the country from terrorists following the Marawi siege.

Among the senators who said they will go to the Palace meeting are Richard Gordon and Manny Pacquiao.

Sotto said there would be a separate meeting for all senators this time with security and defense officials who would brief them on the Marawi situation.  SFM

Read Next
Allies defend Aquino amid Mamasapano raps
EDITORS' PICK
SMDC’s Bloom Residences: A master planned community that cares for your health and wellness
COVID-19 cases in PH pass 3.2 million mark with 37,154 new cases — DOH
Over 3 Million worth of prizes to be won at Smart Padala’s SENDali Manalo Promo!
Upsilon, Unilever give ‘real talk’ on climate change crisis
What to expect as Metro Manila starts ‘no vaccination, no ride’ policy on Monday
Metro Manila’s daily COVID-19 growth rate drops to 2% — Octa Research
MOST READ
IATF protocols now apply to travelers who arrived on or before Jan. 13
‘Not my loss’: Did Kris Aquino just comment on her breakup with Mel Sarmiento?
Thailand records first Omicron death
Tito, Vic and Joey still not quitting, breaking trends as they celebrate 50th year in the biz
Don't miss out on the latest news and information.