Debate over use of jumbo bomber as wildfires rage in West 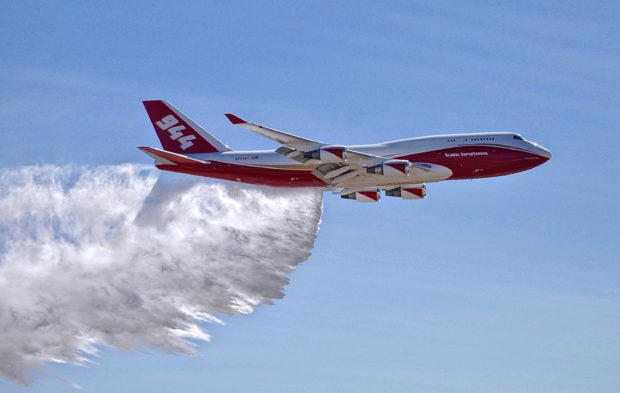 This May 5, 2016, photo provided by Global Supertanker Services shows a Boeing 747 making a demonstration water drop at Colorado Springs Airport in Colorado Springs, Colorado. The company with the 747 retardant bomber that can drop nearly 20,000 gallons (75,000 liters) on wildfires says federal officials are keeping it grounded, putting homes and ground-based firefighters at risk. Officials with Global SuperTanker filed a protest with the U.S. Forest Service in June 2017 contesting a contract limiting firefighting aircraft to 5,000 gallons. AP

BOISE, Idaho, United States — A giant aircraft that can fly high above oceans on intercontinental flights instead jets in low and slow over a flaming forest, trailing a long plume that settles on the ground and creates a wildfire-stopping barrier.

The operators of the Boeing 747 converted from a passenger jet into a firefighting air tanker say it has proven itself battling forest fires in countries outside the U.S. The modifications allow it to drop more than 19,000 gallons (72,000 liters) of a flame-squelching combination of ammonium phosphate and sulfate mixed with water that comes billowing out in a red-colored line.

“We just happen to be the biggest, fastest firetruck in the air,” said Jim Wheeler, CEO of Global SuperTanker Services.

But the company says the U.S. Forest Service is seeking to keep the plane grounded by offering a contract limiting firefighting aircraft to 5,000 gallons (18,900 liters) of fire suppressant and won’t say why. The company says the federal agency is putting homes and lives at risk just as the current wildfire season surges past the 10-year average for land area burned in a decade that includes some of the most destructive and deadly wildfire seasons on record.

Late last month, the company filed a protest with the Forest Service contesting the size limit that appears to conflict with the Forest Service’s 2012 air tanker modernization strategy report. That document identifies large-capacity tankers as an important part of the firefighting effort as the agency tries to pay for fighting fires without using money intended for such things as improving recreation opportunities for forest visitors.

Forest Service spokesman Mike Ferris said in an email the agency couldn’t comment specifically about the possible 747 contract because of the company’s protest.

Watchdog and firefighter advocacy groups said the agency might be trying to cut firefighting costs that have been using up big chunks of its budget. The Forest Service spent $1.6 billion in 2016 fighting wildfires, an amount second only to the $1.7 billion spent in 2015, according to the National Interagency Fire Center.

Besides the 5,000-gallon limit, the interim approval the Forest Service gave for the use of the 747 in January expired last month before the fire season took off and it got a chance to fight fires in the U.S. The company said without the approval, states wouldn’t be reimbursed from the federal government for using the 747.

Some 50 large wildfires are currently burning in the U.S., with about 6,200 square miles (16,000 sq. kilometers) scorched so far this year, well above the 10-year average for this point in the season.

“Where (the Forest Service) is sorely lacking is in the very large air tanker category,” Wheeler said.

The Forest Service has three aircraft in that category defined as having a capacity of greater than 8,000 gallons (30,300 liters). The three DC-10s capable of dropping 11,600 gallons (43,900 liters) are currently under contract with a company called 10 Tanker. Company President John Gould said what’s going on with the 747 concerns him because it could show up in new contracts for his company.

Casey Judd is president of the Federal Wildland Fire Service Association, a group that advocates for wildland firefighters.

“You have the largest fire department in the world managed by the Forest Service,” he said. “There is a little more scrutiny from Congress. There are some changes going on as a result of this increased scrutiny, and the 747 may be a byproduct of that.”

Andy Stahl is executive director of Forest Service Employees for Environmental Ethics, a watchdog group that describes its mission as holding the Forest Service accountable for responsible land stewardship. Stahl said air tankers were initially intended for early attack to prevent wildfires from getting large.

Limiting air tankers to an initial attack role could save the Forest Service money by reducing costs on the largest and most expensive fires where air tankers, Stahl said, are ineffective.

A significant part of the Forest Service’s firefighting cost is buying firefighting material at about $1 a gallon and paying for the aircraft to drop it. Last year the Forest Service reported dropping more than 19 million gallons (72 million liters) on national forest system lands, mainly in Western U.S. states.

Company officials say the 747 is cheaper per gallon of liquid dropped than any other aircraft, a comparison based on what it would cost to drop the same amount using multiple smaller planes.

Another criticism the company rejects are questions about the 747’s ability to operate at low altitudes. The company said firefighting efforts in Israel in and Chile proved its low-flying ability to hit the target.

The California Department of Forestry and Fire Protection currently uses DC-10s to coat ridgetops, a possible job for the 747 as well.

“Would we use it if approved? Absolutely we would use it,” said Janet Upton, deputy director of communications for the agency, most commonly known as CAL FIRE.

It’s not clear when the Forest Service will make a decision involving the protest filed by Global SuperTanker.