White-knuckled bromance for Trump and Macron 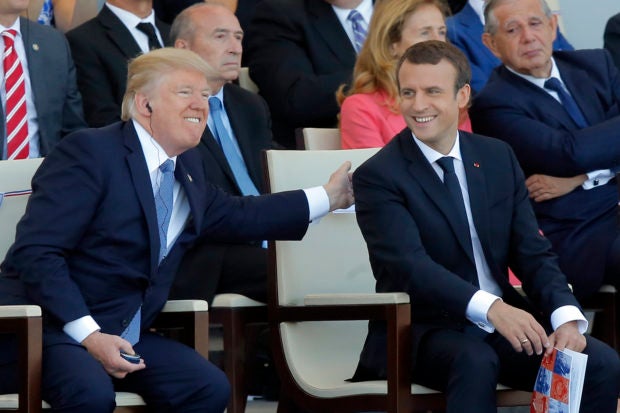 PARIS — A muscular handshake that turned their knuckles white seems to be giving way to a budding friendship between United States President Donald Trump and French President Emmanuel Macron.

The unexpected bromance between the leaders of America and France was on full display for the world on Friday at the annual Bastille Day military parade and celebration in Paris.

This year the event coincided with the 100th anniversary of the US entry into World War I.

Trump spent a large portion of his day and a half in the French capital in the embrace of Macron, who went to extraordinary lengths to impress the US president by turning a day of national pride into a celebration of American patriotism and friendship between the two countries.

Trump and Macron exchanged many handshakes during the course of Trump’s first visit to France as president, perhaps none more telling than the one they shared after the parade.

As Trump prepared to head home to the US, the leaders clasped hands and held on to each other as they walked. Trump at one point pulled the smaller Macron off balance and held fast as they approached their wives. Even then, Trump held on to Macron’s hand as he shook hands with Macron’s wife, Brigitte.

They appeared to have moved beyond that tense introduction in May, when a white-knuckle handshake that Macron later said was meant to show he’s no pushover was widely interpreted as a sign of the fraught relations to come. Trump’s brand of “America First” politics had unsettled some European allies.

But the body language in Paris this week suggested their relationship has moved to a new level. Both seemed to minimize differences in order to focus on areas where they can work together, such as the crisis in Syria and Mideast security.

‘Friendship across the ages’

Macron, in closing the parade, publicly thanked the US for coming to France’s aid during the war, saying “nothing will ever separate us.”

“The presence at my side of the president of the United States, Mr. Donald Trump, and of his wife, is the sign of a friendship across the ages,” Macron said. Trump made no remarks at the conclusion of the parade, but he returned the kindness in a statement released as Air Force One flew back to the US.

“America and France will never be defeated or divided,” Trump said, adding that it was his “high honor” to commemorate, on French soil, France’s most historic day and the 100th anniversary of the entry of the US into World War I.

Despite major differences between the two leaders on such issues as climate change and trade, Macron nonetheless carved out time in his presidential schedule on Thursday to lead Trump on a tour of the Les Invalides monument before Trump gave Macron a lift to the French presidential palace in his armored Cadillac limousine known as “The Beast” for their talks and a joint news conference.

They capped on Thursday with a double dinner date with their wives at the famed Jules Verne restaurant in the Eiffel Tower.

Trump even declined a reporter’s invitation during the news conference to repeat his past criticism of Paris, saying instead that the city’s future is bright because France has a “great” and “tough” leader in Macron.

And Trump’s fawning over Macron extended to Brigitte Macron, whose physical appearance he commented on. “You know, you’re in such good shape,” Trump told the French leader’s wife, before repeating his observation to her husband and adding “beautiful.”

Macron and Trump both came to office as unlikely outsider candidates. At age 39, the youngest president of modern France—and the same age as Donald Trump Jr.—Macron started his own political movement just over a year ago. He won a strong parliamentary majority and is riding high in the polls.

Trump, on the other hand, is riding low in the polls at home and much of his agenda is stalled, despite sharing party control with both houses of the US Congress.