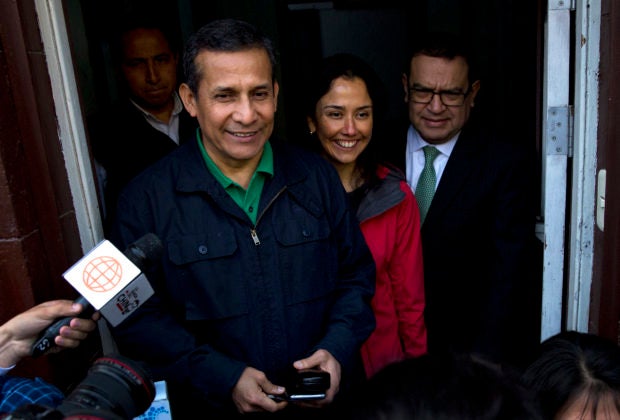 Peru’s former President Ollanta Humala and his wife Nadine Heredia stop to talk with journalists as they leave the headquarters of Peru’s National Party where they met with their lawyers, in Lima, Thursday, July 13, 2017. Prosecutors in Peru have requested the arrest of the former leader who governed Peru between 2011 and 2016 and his wife on money laundering and conspiracy charges tied to a corruption scandal involving Brazilian construction giant Odebrecht. (AP Photo/Rodrigo Abd)

The preventative detention, which would keep Humala and his wife Nadine Heredia in jail for up to 18 months while they are investigated, came after prosecutors argued the couple could flee Peru to evade justice.

Humala and his wife have arrived at the courthouse in Lima and turned themselves in following a judge’s ruling that they should be jailed while they are being investigated.

The couple didn’t attend the hearing Thursday evening at which the judge ordered 18 months of preventative detention during the investigation.

Humala has denied the claims, calling them baseless.

Shouts of protest could be heard in the courtroom as Judge Richard Concepcion issued his ruling.

The allegations against Humala stem from testimony by the former head of construction giant Odebrecht, who said he illegally contributed $3 million to Humala’s 2011 presidential campaign. The couple is also accused of taking undeclared funds from the late Venezuelan leader Hugo Chavez during a previous, unsuccessful presidential bid.

Humala, who finished his term in 2016, never declared the contributions and prosecutors argue he and his wife conspired to hide them for personal gain.

The 55-year-old former leader, who didn’t attend the hearing, has denied the charges, calling them baseless. He says he looks forward to defending himself.

As the couple left their home late Thursday to drive to the courthouse with a heavy police escort, Humala said in a Tweet: “This confirms the abuse of power which we will confront in defense of our rights and those of everyone.”

“We’re staying here, we’ve even handed over our passports,” Humala said during a brief meeting with reporters who had gathered for three days outside his home. “In every moment we’ve shown our roots and good will. But the prosecutor sees everything we do in the opposite light. I think he’s been poisoned.”

The same judge previously ordered the arrest of another former Peruvian president, Alejandro Toledo, for related charges. Toledo is in the U.S. fighting attempts by Peruvian authorities to have him deported to answer the charges.

Authorities across Latin America have been moving to charge officials accused of taking some $800 million in bribes from Odebrecht. The company acknowledged the bribes when it signed a plea agreement in December with the U.S. Justice Department.

The bribes include some $29 million paid in Peru for projects built during the administrations of Toledo, Humala and former President Alan Garcia.

The same scandal has ensnared former Brazilian President Luiz Inacio Lula da Silva, who was convicted Wednesday and sentenced to almost 10 years in jail for taking gifts from another Brazilian builder who along with Odebrecht paid bribes to politicians in exchange for government contracts. He denies the accusation and will remain free while he appeals what he says are politically motivated charges. JPV/rga

Read Next
Duterte to submit proposed 2018 budget on day of Sona
EDITORS' PICK
Metro Manila to remain under COVID Alert Level 2 until December 15
IATF tightens border control, suspends entry of fully vaxxed nationals from ‘green’ countries
Villar Group gears up for AllValue Shopping Party on Dec. 3; around P 1-million promos and discounts up for grabs
Duterte open to making jabs mandatory; Cabinet mulls ‘pressuring’ the unvaccinated
Legarda: Ending Violence Against Women, a cause for all
A delightful blessing!
MOST READ
Quiboloy warns of ‘much worse than Omicron virus’ if his ‘persecution’ is not stopped
Marcoleta defends pol ads on ABS-CBN
Omicron poses ‘very high’ global risk, countries must prepare–WHO
Gov’t plans to open COVID-19 vaccination for 5- to 11-yr-olds by January 2022
Don't miss out on the latest news and information.