FA-50 jets pulled out of combat in Marawi | Inquirer News

FA-50 jets pulled out of combat in Marawi 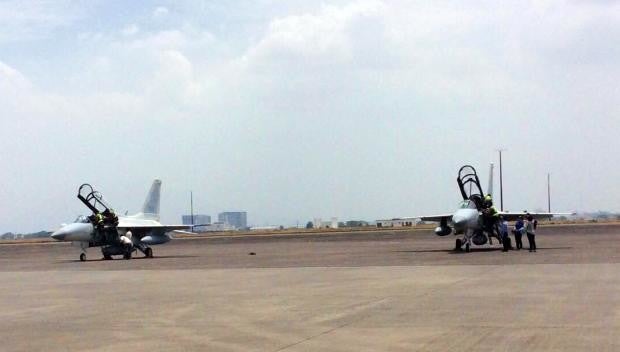 The military has pulled out its FA-50 jets from the campaign to clear Marawi City of terrorists after one of the supersonic planes was involved in a “friendly fire” incident that killed two soldiers and injured 11 others on Wednesday.

Malacañang on Thursday condoled with the families of the two soldiers who died.

“We are saddened by this unfortunate incident,” presidential spokesperson Ernesto Abella said.

Abella said a team had been formed to “investigate the circumstances that led to this tragedy.”

The incident on Wednesday was the second time soldiers have been killed by their own air support since fighting began in Marawi City almost two months ago.

On May 31, 11 soldiers perished when a bomb intended for Maute group terrorists and their Abu Sayyaf allies holed up in the city landed on a place occupied by government troops.

On Wednesday, the Army called airstrikes at midday against a building where terrorists were believed to be hiding, but one of four bombs dropped by an FA-50 fighter jet fell short, Brig. Gen. Restituto Padilla Jr., spokesperson for the Armed Forces of the Philippines, told a news conference on Thursday.

“The bomb fell in an area proximate to a building where some of our men were staying and the ensuing blast caused part of that building to collapse,” Padilla said.

“The debris that fell from the part of the collapsed structure fell on our men, causing the death of two and injuries to 11 others,” he said.

Padilla said the incident was being investigated and the FA-50s would be kept on the ground while the investigation was going on.

“The FA-50 will momentarily be pulled out from employment … until the investigation has been conducted and once we have ascertained whatever reason was behind one of the bombs falling short of target,” he said.

Only the FA-50s have been suspended from conducting airstrikes, Padilla said.

Other Philippine Air Force aircraft will still be used  to provide air support to ground troops, he added.

In a statement, Defense Secretary Delfin Lorenzana said the friendly fire incidents “reflect the harsh nature of urban warfare where soldiers operate in tight spaces and in close proximity to the enemy.”

Lorenzana said the problems faced by the military were similar to those encountered by other nations taking on terrorists in Mosul, Fallujah and Raqqa, referring to the major strongholds of the Islamic State (IS) jihadist group in Iraq and Syria.

“We have to operate with due consideration for the safety of the civilians who are still trapped in the area against enemies who know no rules, who use hostages as human shields and children as frontline fighters,” he said.

“Our resolve to end the situation, however, has not wavered. In fact, we are now more determined than ever to finally eliminate these terrorists, and we will not stop until evil is vanquished, not only in Marawi City, but also in the whole of Mindanao,” he added.

Lorenzana said that the military was “reviewing and recalibrating its existing doctrines in order for the troops to adapt and respond to this evolving type of war.”

Padilla said the military had constituted a board of inquiry that would look into Wednesday’s accident.

Padilla, himself an Air Force pilot, said the FA-50s had a “high success rate” in bombing runs in Marawi City.

Of the 70 runs they had made, Wednesday’s incident was the only time that one bomb went “wayward from a pool of four jets that did not hit its target directly,” Padilla said.

“The high success rate of the aircraft in previous missions is indicative of its efficiency and effectivity as a platform that supports our troops. However, the accident [on Wednesday] will require us to look closely and what caused the failure of one of the bombs and once we determine that remedial measures will have to be undertaken to correct it,” Padilla said.

On Wednesday night, the military said initial reports from Marawi indicated that the bomb landed 250 meters off-target and the impact of the explosion caused structures to collapse.

A well-placed military source told the Inquirer late Wednesday that the FA-50s were using ordinary ordnance and not precision guided munitions, or PGMs.

The acquisition of the weapons usually comes after the aircraft, the source added.

The source said that without the PGMs, Air Force pilots depend on their skills in maneuvering the FA-50s toward their targets.

The FA-50, technically a trainer aircraft, can accommodate a wide range of weapons system.

Padilla told the Inquirer on Thursday that the procurement process for the FA-50s’ weapons system began during the previous Aquino administration.

He said procedures that have to be followed in procuring a weapons system, such as securing clearances, needed to be followed. —WITH REPORTS FROM PHILIP C. TUBEZA AND AFP