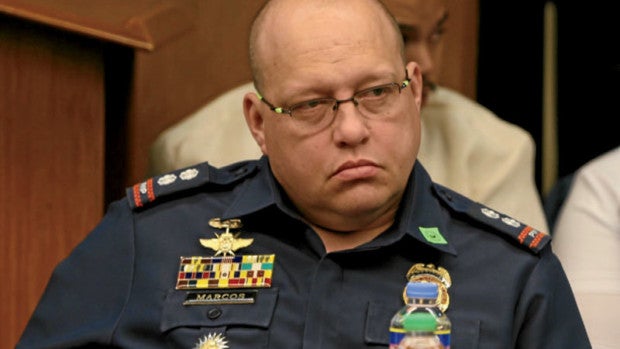 Senators on Thursday slammed the reinstatement of Supt. Marvin Marcos and 18 other policemen, with an enraged Sen. Panfilo Lacson using President Duterte’s favorite expletive in describing the move.

The Philippine National Police chief, Director General Ronald dela Rosa, on Wednesday announced the return of Marcos and his men following the downgrading of the criminal charges against them from murder to homicide in connection with the killings of Albuera, Leyte, Mayor  Rolando Espinosa Sr. and another inmate in their jail cells during a predawn raid in November last year.

Lacson insisted the move was “not even a reinstatement.”

“Rather, it was back-to-duty status after serving his four-month suspension order incorporated in a ‘slap-on-the-wrist’ administrative penalty imposed on Marcos by the PNP Internal Affairs Service (IAS) and subsequently approved by Dela Rosa,” Lacson said.

In a text message, Lacson said he got information months ago from the IAS, which looked into the administrative liabilities of Marcos and his men, that it had decided in favor of the policemen.

‘Phrase to describe this’

“According to the decision, Marcos was not physically present when the raiding team  killed Espinosa and Raul Yap, but was outside supervising the operation. The others were given demotions and six-month suspension,” Lacson said.

“This effectively disregarded the conspiracy angle. In sum, there is a phrase to describe this whole damn thing: P… ina!” Lacson said.

Asked to comment on the reinstatement having the blessings of the President, he said: “Same last phrase starting with letter P.”

Mr. Duterte had said Marcos should be allowed to go back to work since he was not inside the jail when Espinosa, an alleged big-time drug distributor,  and Yap were killed.

Dela Rosa confirmed on Thursday the designation of Marcos, upon his reinstatement, as head of the PNP Criminal Investigation and Detection Group (CIDG) in Soccsksargen (South Cotabato, Cotabato, Sultan Kudarat, Sarangani and General Santos). Marcos was previously regional CIDG chief for Eastern Visayas.

“They have been reinstated,” the PNP chief told reporters. “The administrative case against them has been resolved.”

Dela Rosa claimed that the IAS did not recommend demotion for Marcos, only suspension.

“We were able to show that the justice system works,” he said. “If a drug pusher or a drug lord can claim the right to due process, why not a police officer who has undergone due process?”

Said presidential spokesperson Ernesto Abella: “The President respects and abides by the rule of law. (Marcos) has served his suspension and is eligible to be back to duty.”

Lacson’s  committee on public order and dangerous drugs looked into the Espinosa killing and concluded in March that the police killed the mayor and Yap in cold blood inside a subprovincial jail in Leyte province and recommended murder charges against them.

But the Department of Justice downgraded the murder charges to homicide and allowed the officers to post bail.

Lacson, a former PNP chief, said he intended to hold a hearing on the IAS reorganization.

Senators Grace Poe and Sherwin Gatchalian said the reinstatement of Marcos and his men would tarnish the image of the PNP and send a wrong signal to the police force.

“Such reinstatement may just encourage a culture of impunity among the ranks,” Poe said.

Gatchalian said it would be “more prudent for the PNP to hold whatever promotion or movement because there is an outcry here in the Senate on why this happened.”

Sen. Antonio Trillanes IV said Mr. Duterte “fears that these policemen might rat on him for what they know about his involvement in the Espinosa murder.”

Sen. Risa Hontiveros said the reinstatement was a “clear attempt to obstruct the course of justice and a tacit approval of extrajudicial killings in the country.”

Sen. Francis Escudero said the Duterte administration wasted the opportunity to show its critics and the international community that it would not tolerate abusive policemen  when it treated Marcos with “kid gloves.” —WITH REPORTS FROM PHILIP C. TUBEZA AND JEANNETTE I. ANDRADE