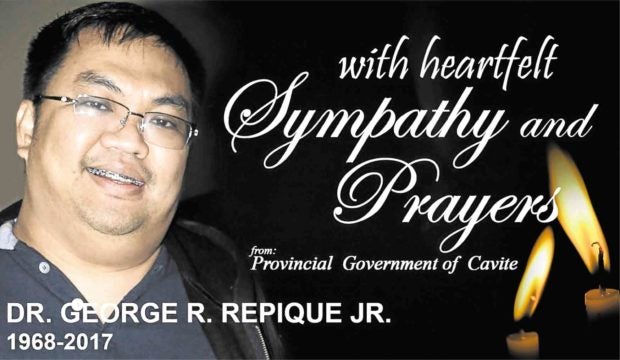 Colleagues and former classmates of the slain provincial health officer of Cavite condemned his murder as they brought to light the government’s role in protecting its frontline personnel.

Dr. Gene Nisperos, vice chair of the Health Alliance for Democracy (Head), described Dr. George Repique Jr., who was shot and killed by motorcycle-riding gunmen on Tuesday night in Trece Martires City, as effective in his job who made sure that “the system worked to serve the poor.”

“He had a sense of commitment that made him very effective,” Nisperos said.

Nisperos and Repique were classmates at the University of the Philippines (UP) College of Public Health in Manila, where Repique eventually joined the faculty of the Department of Family and Community Medicine.

In 2010, Repique became Cavite’s health officer under the administration of former Gov. Jonvic Remulla. He started the partnership between the UP Community Health and Development Program (CHDP) and the Cavite government in 2013 under a health program called Cavite AMIGA, an acronym for the towns of Alfonso, Mendez, Indang,
General Emilio Aguinaldo and Amadeo.

Before he was killed, Repique was also working for the increase of the salaries of health personnel at the General Emilio Aguinaldo Memorial Hospital in Trece Martires.

Supt. Egbert Tibayan, city police chief, said police had found eyewitnesses, among them tricycle drivers and students, who could help identify the gunmen.

“We strongly condemn what happened to George and demand justice as these things send a chilling message to our frontline health workers at the grassroots,” Nisperos said. —MARICAR CINCO