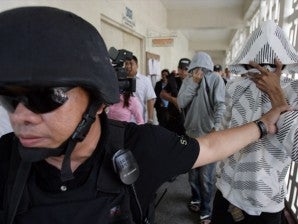 Two men who were allegedly hired to kill Ramgen Bautista claimed Wednesday that while they participated in the planning of the murder, they backed out at the last minute—one went on a drinking spree and the other stayed home.

In sworn statements submitted at their preliminary investigation, Michael Jay Nartea and Roy Francis Tolisora denied participating in the October 28 killing of Ramgen and the wounding of his girlfriend Janelle Manahan.

Ana Luz Cristal-Tenorio, counsel for the two, told reporters following the closed-door hearing at the city prosecutor’s office that her clients had  an “airtight alibi” to support their claim that they were not even at the scene of the crime.

“They were asked to gun down Ramgen but they backed out after the foiled attempt on October 11. They were not there on October 28,” said Tenorio.

Known as Ram Revilla in show biz, Ramgen, a son of movie star and former Senator Ramon Revilla Sr., was shot and stabbed dead in the family residence on October 28. Manahan was shot in the face and was seriously wounded.

The principal suspects in the killing are Ram’s younger brother Ramon Joseph “RJ” and sister Ma. Ramona or “Mara.”

Tolisora said he was at a drinking spree in the store of a certain Liza in Parañaque City from the night of October 28 up to 4 a.m. and was not present at Ramgen’s house at BF Homes Parañaque, when he was killed. Nartea said he was at home at the time.

The two said RJ and Mara had “an active participation” in the murder.

They said that on the morning of October 11, another suspect only known as “Bryan” and described as a friend of RJ, drove the car in the first attempt to get inside the house and kill Ramgen but it did not push through.

On that same night, they said that Mara drove for them because as nonresidents they could not get into the subdivision.

Tolisora and Nartea insisted that they were “not aware”  of the identity of the masked gunman  who shot and stabbed Ramgen as described by his wounded girlfriend.

“When Kiko [Tolisora] and Michael [Nartea] backed out, Katcho [Ruel Puzon] and Lim [Loyd Comeda] were supposed to do the job. But apparently they backed out, too,”  Tenorio said.

“According to my clients, it was Glaiza Vista’s men who were the ones who finished the job,” the lawyer said.

Puzon and Comeda have surrendered, while Vista and her boyfriend Norwin dela Cruz, both described as “facilitators,” remain at large.

Tenorio said her clients were paid P50,000 as down payment for their services and also to buy a gun.

“In fact, when they didn’t push through with the plan, they wanted them to return the money,” the lawyer said.

“Michael and Kiko said that they were informed that their target, Ramgen, was a bad boy. They said he hurt his mom,” the lawyer said.

In earlier statements, Puzon narrated that he was part of the group that planned Ramgen’s murder but that he did not participate in its execution.

Police investigators still consider Tolisora and Nartea as suspects and are under their custody. They were arrested in San Dionisio, Parañaque. They have included Mara, the man named Bryan, Vista and Dela Cruz as suspects-at-large.

“They remain suspects but their lawyer gave two counter affidavits of Tolisora and Nartea and three affidavits of their witnesses,” said Chief Inspector Enrique Sy, who heads Task Force Ramgen.

The preliminary investigation was initially scheduled on Tuesday, but Tenorio explained that she did not push through with it because she was preparing for the case and was getting testimonies from witnesses.

On Tuesday, RJ, 18, the primary suspect in the murder, was transferred from the Parañaque police detention cell to the city jail after charges of murder and frustrated murder were filed in Regional Trial Court Branch 274 under Judge Fortunito Madrona.

RJ has waived his right to a preliminary investigation after which Assistant City Prosecutor Leah Roma on Tuesday directed RJ’s detention at the Parañaque City Jail.

The arraignment has been set for November 16.

Escorted by SWAT personnel, RJ is to be quarantined for five days until Saturday. “This is part of the procedure for all newly committed inmates,” said warden Paulino Moreno Jr.

Moreno said that RJ would undergo an “orientation” while inside the holding area. He said that  RJ, whose family belongs to a long line of politicians and actors, will be treated just like any other jail inmate.

“We will not give any VIP or special treatment to RJ, irrespective of whether he is the son of a former senator or a brother of a current senator,”  Moreno said.

After the quarantine, RJ will be assigned to the fourth floor of the city jail.

“RJ has been assigned there to join other regular inmates without gangs or affiliations,” said Moreno.

Manzanal filed a motion to quash information on Tuesday at RTC Branch 274 after his motion for RJ’s immediate release was denied by  Roma.

The motion sought the dismissal of the case purportedly because the information used by police for the warrantless arrest was mainly from a “voluntary reportee who had knowledge on the planning but not on the actual commission of the crime.”

Manzanal also filed on Wednesday a motion for preliminary investigation anew and asked the court to release RJ while this was being conducted.