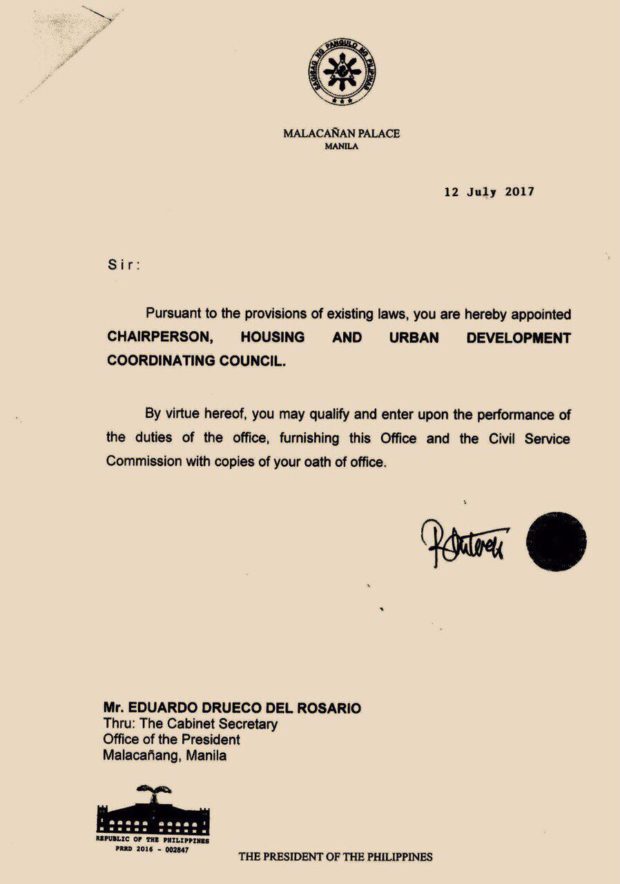 The appointment paper of Major Gen. Eduardo del Rosario, as head of the Housing and Urban Development and Coordinating Council.

A former military man and a lawyer of former president Gloria Macapagal-Arroyo were among the newest appointees of President Rodrigo Duterte to his Cabinet.

The NDRRMC, under del Rosario’s watch, was accused of underreporting the death toll from  Supertyphoon “Yolanda.” Three months after the deadly typhoon in November 2013, his agency said that 6,166 died in the disaster. The public in general, which was expecting a higher number following a statement by a local police chief that the death toll could reach 10,000, did not believe the NDRRMC’s figures. He threatened to resign if proven that the agency downplayed the number of the fatalities.

Lambino was a former spokesman and lawyer of Arroyo.

His appointment papers were signed on July 5.

Read Next
UP chancellor clarifies earlier pronouncement on tuition collection
EDITORS' PICK
Kalinga, Ifugao, Mt. Province, N. Samar will be under Alert Level 4 from Jan 21-31
Gear up and get ready to play with Yamaha Mio Gear
Mobile COVID-19 vaccination for commuters, transport workers set at PITX
Acer starts the year off strong with the Aspire Vero National Geographic Edition
Municipal court in Pangasinan sets arraignment for ‘Lolo Narding’
31,173 new COVID-19 cases push PH’s active tally to 275,364
MOST READ
Imelda Marcos trends on Twitter after octogenarian jailed for allegedly stealing mangoes
SSS: Members on home quarantine due to COVID-19 can apply for sickness benefit
Villar backs implementation of EDSA decongestion blueprint
Help pours in for octogenarian jailed for ‘stealing’ mangoes in Pangasinan
Don't miss out on the latest news and information.