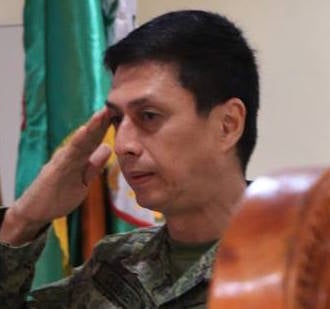 TAGUM CITY — The military on Thursday said it had thwarted a possible plan by communist guerrillas to stage a spectacular attack in Southern Mindanao ahead of President Duterte’s State of the Nation Address (SONA) following a deadly clash in Compostela Valley province that left nine people dead.

Maj. Gen. Noel Clement, 10th Infantry Division commander, said the fighting in the upland town of Laak was a reminder for the troops “not to lower our guards down against any armed threat that can harm our people.”

The attack in LS Sarmiento village happened as soldiers from the 25th and 60th Infantry Battalions were pursuing a group of New People’s Army guerrillas who have fled following the collapse of a rebel encampment in Casoon village in adjacent Monkayo town early in the week, Capt. Alexandre Cabales, acting 10th ID spokesperson said. Cabales said a large force of insurgents were massing at the Laak-Monkayo border, prompting the military to conduct an operation that led to an encounter last July 10.

Military officials believed the NPA buildup along the boundary of the two Compostela Valley municipalities was part of the communists’ plan to intensify attacks leading up to Mr. Duterte’s national address on July 24.

At least eight rebels died in the fighting, one of the biggest losses of the NPA in Mindanao in recent years. A soldier also succumbed to his injuries, the military spokesperson said.  “Well it was a consolidation for a tactical offensive they will conduct as part of their so-called compliance to a directive to intensify attacks leading to the SONA,” Cabales said.

“So definitely it will have an effect since their consolidation was preemptive so they will have to change their plan,” he added. Soldiers also recovered five assault rifles, an M-60 machine gun and several improvised explosives from the scene of fighting.

A day before the bloody clash, rebels also abducted PO1 Alfredo Basabica Jr. of the Davao Oriental public safety company after stopping a Davao City-bound bus he was on at a rebel checkpoint in Compostela town.

Chief Supt. Manuel Gaerlan, Southern Mindanao police chief, said Basabica was kidnapped by a “terrorist group” on his way to visit his family in Davao City.

Operations were continuing to find and rescue the kidnapped policeman, Dela Rey said.

The recent fighting erupted as the military was locked in nearly two months of war against Islamic State-inspired terrorists in Marawi City, 340 kilometers to the west.  SFM