Trump says he gets along 'very, very well' with Putin | Inquirer News

Trump says he gets along ‘very, very well’ with Putin 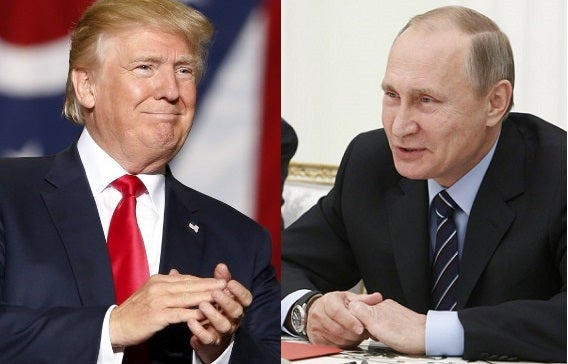 WASHINGTON, United States — US President Donald Trump said in an interview Wednesday that he has a good relationship with Russian President Vladimir Putin, after the two met for more than two hours in Hamburg last week.

“People said, ‘Oh, they shouldn’t get along.’ Well, who are the people that are saying that? I think we get along very, very well,” Trump told evangelical Christian leader Pat Robertson on the Christian Broadcasting Network.

“We are a tremendously powerful nuclear power, and so are they. It doesn’t make sense not to have some kind of a relationship,” Trump said.

Trump, who has come under criticism for his reluctance to criticize Putin directly over Russia’s meddling in US elections last year, said the two had an “excellent meeting” on the sidelines of the G20 summit last Friday.

“One thing we did is we had a ceasefire in a major part of Syria where there was tremendous bedlam and tremendous killing,” he told Robertson, according to a partial transcript released by CBN.

“The ceasefire has held for four days…. That’s because President Putin and President Trump made the deal, and it’s held.”

Trump said that he felt Putin would have preferred Hillary Clinton win last year’s election — even though US intelligence says the Russian leader directed a covert effort to help defeat the Democrat.

“We are the most powerful country in the world and we are getting more and more powerful because I’m a big military person. As an example, if Hillary had won, our military would be decimated,” Trump said.

“That’s why I say, why would he want me? Because from day one I wanted a strong military, he doesn’t want to see that.”

On Saturday, Putin told reporters he had hopes for the bilateral relationship after meeting Trump.

“The Trump that you see on TV is very different than the real Trump,” Putin told reporters at the G20 in Germany.

“He perfectly understands whom he is talking to and answers questions quickly. I think personal relations were established.” CBB