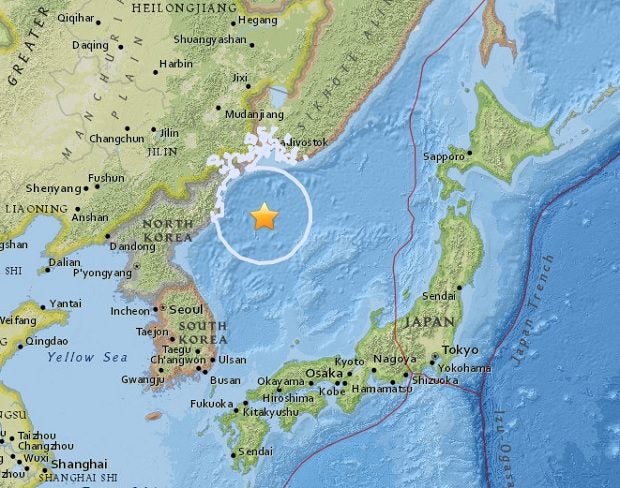 A star marks the epicenter of the 5.9 earthquake that hit the sea off North Korea early Thursday, July 13, 2017. USGS MAP

SEOUL, South Korea — An undersea earthquake off the coast of North Korea was not caused by a nuclear test, the South’s media reported Thursday.

The 5.9 magnitude quake struck about 190 kilometres (120 miles) south east of the reclusive state’s third largest city, Chongjin, in the early hours of Thursday, according to the United States Geological Survey.

North Korea has staged five nuclear tests — including two last year — and has made a significant progress in its missile capability under Kim Jong-Un, who took power in 2011.

But the quake, which did not trigger a tsunami warning, was not caused by a nuclear test, Yonhap news agency reported USGS geophysicist John Bellini as saying.

“It occurred at 500 km below the seabed,” he told the agency.

Tensions between Pyongyang and the US soared earlier this month when the North test-fired an intercontinental ballistic missile for the first time, an apparent game-changer in its confrontation with Washington over its nuclear and missile programs. CBB