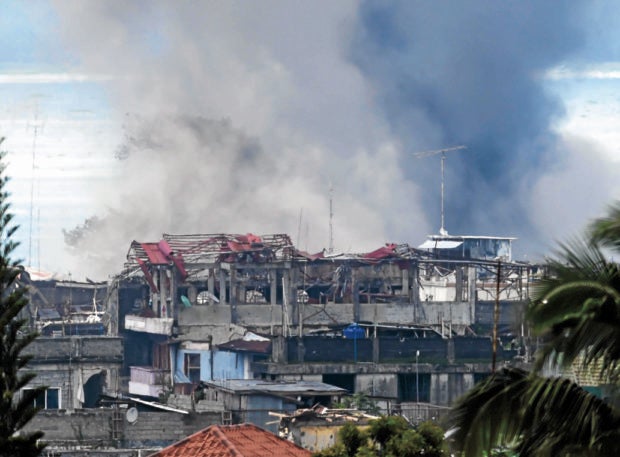 RUINED CITY Airstrikes and artillery bombardment have left much of Marawi City in ruins. —AFP

MARANTAO, Lanao del Sur — Each day since fighting erupted in Marawi City on May 23, 12-year-old Mustapha would rush to the bank of Lake Lanao in his village of Kialdan here whenever he heard the drone of approaching warplanes.

He would then train his eyes on Marawi City, less than 3 kilometers from Kialdan.

The 11th among 12 siblings, Mustapha — whose parents once tended a small grocery store in Barangay Bangolo in Marawi City — said he was being drawn to the same location each day because it was the perfect spot for him to see how the planes dropped bombs on the city.

“I’m hurt when I see the destruction,” Mustapha said, but added that he was not angry with the government because Marawi would not be devastated if Maute and Abu Sayyaf terrorists had not seized the city.

“They are destroying our city. My parents lost their business,” he said.

Mustapha said he had decided to become a policeman when he grew up.

“I will continue my studies. I will fight the Maute,” he added.

Most of the Maranao children whom the Inquirer had spoken to, including those in the evacuation centers in Balo-i, Lanao del Norte, and Iligan City, have found a new reason to stay in school — to join the government in the fight against terror.

‘They destroyed our lives’

“I am still too young today but I will grow up and someday… I will fight them because they destroyed our lives,” Disumimba, 14, said.

Disumimba said his parents kept telling him the Maute gunmen were not Muslims.

“If they were really Muslims, why did they make the Maranao suffer?” he asked.

Nabil, 9, said he wanted to be a soldier to fight bad people.

When told the Maute group had been claiming it was fighting for Islam, Nabil replied: “Really? If so, why Marawi?”

Disumimba said he grew up with the knowledge that Marawi was the Islamic city of the Philippines.

“Now, it’s in ruins because of them,” he said, blaming the Maute group and its allies.