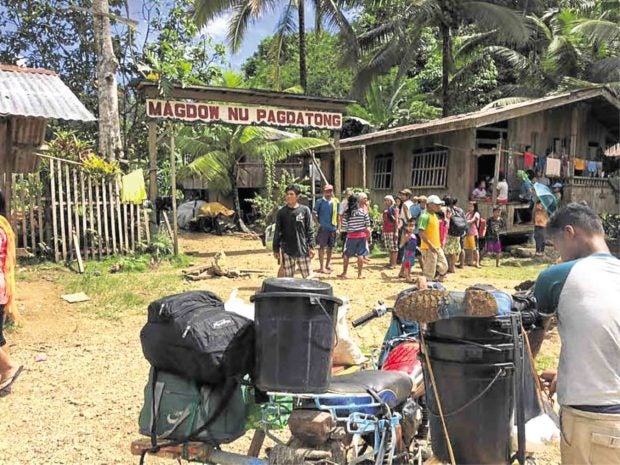 LIANGA, Surigao del Sur — Less than a year after their return to their villages, more than 2,000 Manobo lumad (indigenous peoples) from nine hinterland villages in three towns had to flee their homes again as soldiers occupied their communities last week, the human rights group Karapatan said.

The lumad residents now staying at Simowao Tribal Community School in Sitio Emerald in the village of Diatagon here are the same people who left their community in Sitio Han-ayan and stayed for a year in Tandag City after the killing of educator Emerito Samarca and lumad leader Dionel Campos on Sept. 1, 2015.

Residents blamed the paramilitary group Magahat-Bagani for the murder of Samarca and Campos. The group, they said, was targeting suspected communist leaders and sympathizers.

The lumad returned to their villages in September 2016 after the military left their community.

“Now, amid martial law and continuing militarization, these indigenous communities are again threatened by military operation,” Karapatan said in a statement.

Karapatan said after President Rodrigo Duterte declared martial law in Mindanao on May 23, a checkpoint was put up in front of the military detachment in Barangay Diatagon where residents and visitors were required to show identification cards or write their names in a logbook.

Villagers also noted increased presence of soldiers in the area after the President declared martial law following the siege of Marawi City by Islamic State-inspired terrorists.

But Col. Franco Nemesio Gacal, commanding officer of the 402nd Army Brigade based in Tandag City, told reporters that the military helicopter just passed by Han-ayan since the area was part of its usual route.

According to Gacal, the Army patrol base in Diatagon has been operating for a long time. He said checking people passing through the area was “standard operating procedure.”

On July 4, another group of soldiers was posted in Barangay Bolhoon in San Miguel. On the same day, residents of Diatagon and Panukmoan villages said they saw soldiers in farming areas in their communities, prompting them to leave.

Karapatan said military aircraft flew over the communities on July 5 and July 6, prompting lumad residents in Diatagon to evacuate to a school outside their village.

“We have yet to recover from being displaced, and now we are again forced to evacuate,” said resident Josephine Pagalan.