There’ll be 105M Pinoys by year-end 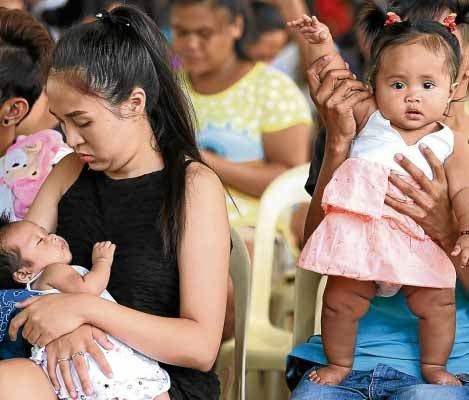 The population of the Philippines will hit 105.75 million at the end of the year, the Population Commission (PopCom) said on Tuesday.

“Whether this is alarming or not depends on the government’s capacity to provide services to its people,” Tacardon told reporters during the celebration of World Population Day in Quezon City.

“The segment of our population that remained huge is still the poorer sector,” he said.

Data from the Philippine Statistics Authority for 2016 showed that one in 10 women of child-bearing age was a teenager. It said 24 babies are being born every hour.

One in 10 Filipino women aged 15 to 19 is already a mother or pregnant with her first child, according to the 2013
National Demographic and Health Survey.

This urgent concern may be dealt with “by coming together for age-appropriate sex education,” Beck said.

He noted that the Philippines was in the “best opportunity in history” for vigorous action on responsible parenthood and family planning.

Despite the temporary restraining order from the Supreme Court on some provisions of the reproductive health law, Tacardon said Filipinos still had access to other family planning services at public and private health centers.

In January, President Rodrigo Duterte signed Executive Order No. 12, which intensified access to these services.

In partnership with the Quezon City government, the celebration of World Population Day featured a health caravan that provided family planning services and counseling to more than 600 couples from urban poor communities.

For 22-year-old Mae, the celebration came at a perfect time, as she expressed willingness to get a contraceptive implant after her third child.

An implant is a matchstick-size rod placed under the skin, in the inside of the arm. It releases progesterone hormones and stops the body from releasing an egg monthly.

The eldest of eight children, Mae, a resident of Payatas village, first gave birth at 18.

“Family planning is really important so I would not have to give birth again so soon,” Mae said, adding that she was following the example of her own mother, Mildred, who decided to have an implant after eight children. —With a report from Pauline Faye Tria

41 percent of population aged 25 to 29 years old, the biggest group among all age brackets

32 percent of population aged 0 to 14 years old, the second biggest group among all age brackets.

13th: rank of the Philippines in terms of population among all countries

2nd: rank of the Philippines in terms of population among Asean members, next to Indonesia’s 264 million