US deportations of Europeans could exceed last fiscal year 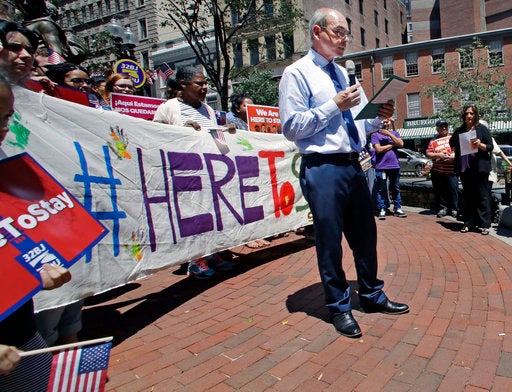 In this Thursday, July 6, 2017 file photo, Ronnie Millar, of the Boston-based Irish International Immigrant Center, addresses a “Here to Stay” rally at the Irish Famine Memorial in Boston, where immigration activists and labor groups gathered to oppose the president’s crackdown on illegal immigration. Immigration and Customs Enforcement data provided to The Associated Press show that more than 1,300 Europeans were deported through June 24. About 1,450 Europeans were deported in 2016. AP Photo/Charles Krupa

BOSTON  — Europeans often hid in plain sight as Latin Americans, Asians and others living illegally in America were sent packing. But now they’re starting to realize they are not immune to President Donald Trump’s crackdown on illegal immigration, and they’re worried.

The number of Europeans deported this federal fiscal year from the United States could surpass last fiscal year’s total, according to figures provided to The Associated Press by Immigration and Customs Enforcement.

From Oct. 2, 2016 through June 24, more than 1,300 Europeans have been removed, compared with 1,450 during all of federal fiscal year 2016 — the last under President Barack Obama. The agency didn’t provide estimates broken down by calendar year.

And in Boston, John Cunningham, a well-known Irishman who had overstayed his visa by 14 years, was sent back to Ireland last week, sending shivers through the city’s sizeable Irish expat community.

“People are very, very concerned and lying low,” says Ronnie Millar, of the Boston-based Irish International Immigrant Center. “The message is that if it can happen to John, it can happen to anyone.”

Europeans comprise about 440,000 of the estimated 11 million people living illegally in the United States, according to the Migration Policy Institute.

Since just before Trump was elected last November, the U.S. has deported 167,350 foreigners, compared with 240,255 in all of fiscal year 2016. Immigrants from Latin America make up the most by far, with Mexico leading the way at about 93,000.

Immigrant advocates say they’ve been urging individuals to know their rights if they’re stopped and for parents to make arrangements for their children in the event they’re detained.

“The worst aspect of these numbers from our perspective is that our community organizations do not know who is being deported and why, and are unable to send immigration attorneys to assist them,” says Dmitri Daniel Glinski, president of the Russian-Speaking Community Council of Manhattan and the Bronx.

In California, San Jose resident Denis Davydov was detained for more than a month after returning from a vacation in the U.S. Virgin Islands.

He was eventually released after his lawyer argued Davydov was legally allowed to re-enter because he’s currently seeking political asylum for being gay and HIV-positive. But he could be forced to return to Russia if his request is denied.

Davydov says the experience of being detained — and the uncertainty it has thrust into his asylum application — has left him feeling vulnerable.

At the Polish American Association in Chicago, executive director Magdalena Dolas said her organization has been asked to give talks about what residents should do if immigration officials show up at their doorstep.

“People are worrying about their rights,” she said. “It shows there is awareness but that there is also anxiety.”

The Chicago Irish Immigrant Support Center has been receiving triple the number of inquiries on immigration and legal service matters these days as it did a year ago, said Michael Collins, executive director.

There have been 18 deportations among Irish nationwide in the current fiscal year, compared with 26 in all of last fiscal year, according to the ICE data.

“The rumor has gone around, ‘Don’t go in any courthouses, and if you hear a knock on your door and you’re not expecting anyone, don’t answer it,” said Benny Murphy, a 32-year-old bartender in Boston who had been living in this country illegally until about three years ago, when he married a woman who is a U.S. citizen.

Many believe Cunningham simply forgot the golden rule of living in the shadows: Keep your head down./rga