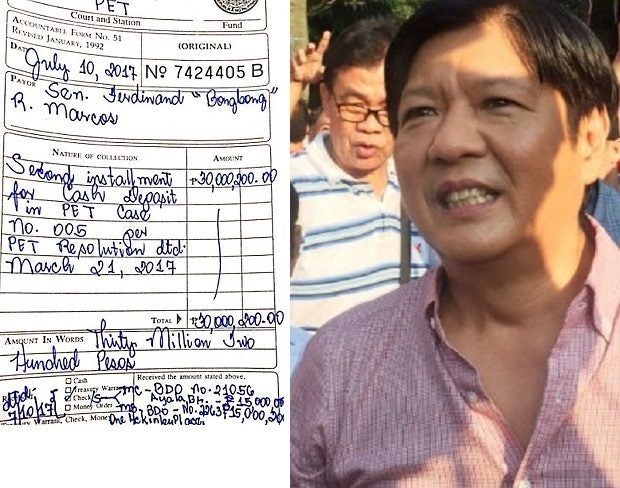 The receipt on the left shows the last installment made by former Sen. Ferdinand Bongbong on Tuesday, July 11, 2017, for his electoral protest against Vice President Leni Robredo. TETCH TORRES TUPAS / INQUIRER FILE

The payment was contained in two checks–one for P15-million and another one for P15.2-million. Marcos paid the balance ahead of the July 14 deadline set by the Supreme Court sitting as the Presidential Electoral Tribunal (PET).

The PET will conduct its preliminary conference on Marcos’ protest and Robredo’s counter-protest.
Marcos earlier said he decided to file the electoral protest due to the series of frauds, anomalies and irregularities that marred the May 9, 2016, elections and that such activities led to his loss to Robredo, the vice presidential candidate of the Liberal Party. 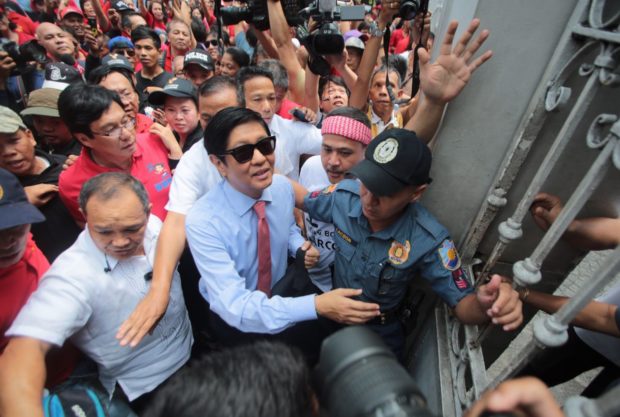 Bongbong Marcos arrives at the Supreme Court to attend the pre-conference of the election protest on Tuesday, July 11, 2017. -PHOTO/Grig C. Montegrande, INQUIRER

The PET earlier designated hearing officers to assist in the reception of evidence. Appointed are retired Supreme Court Associate Justice Jose C. Vitug as the chairperson of the panel of commissioners. His members are Atty. Angelito C. Imperio and Atty. Irene Ragodon-Guevarra.

The panel of commissioners, the PET said shall assist in the reception of evidence pursuant to Rule 55 to 62 of the PET rules.

Under the rules, the panel shall set the date for the reception of evidence of all the parties involved in the protest and counter-protest.

The same panel shall receive the affidavits of witnesses and hear their direct testimonies of witnesses as well as their cross, re-direct and re-cross examination. The hearing commissioners also has the authority to rule on the objects made in the course of the cross-examination subject to review by the PET.

After the hearing, the hearing commissioners shall submit all the evidence presented as well as the transcripts of the proceedings before the PET.

The first part of Marcos petition was about the Automated Election System (AES). He said the vote counting machines (VCM) which was one of the components of the automated system supplied by Smartmatic has no “demonstrated capability” nor was it ever successfully used in a prior electoral exercise either in the Philippines or in any other country.

The second part of his petition consists of the more “traditional” modes of  cheating like vote buying, pre-shading, intimidation and failure of elections, among others.

Marcos is also asking the PET to annul the election results in Lanao Del Sur, Basilan and Maguindanao where the ballots have been pre-shaded. and recount of 22 provinces and five cities.

The third part of the protest focused on the unauthorized introduction by Smartmatic’s Marlon Garcia of a new hash code (or a new script / program) into the Transparency Server as well as the effects brought about by the unauthorized change.CBB/rga