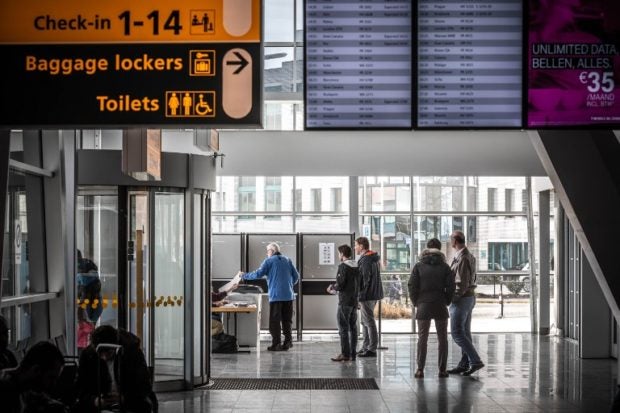 People queue to cast their vote as part of the general elections, on March 15, 2017, at Eindhoven Airport in the Netherlands. The airport’s control tower had to be evacuated for two hours on Monday, July 10, 2017, after a noxious smell affected flight control personnel. AFP

THE HAGUE, Netherlands — Flights in and out of the Dutch airport of Eindhoven were halted for two hours Monday when the control tower had to be evacuated because of a strange smell.

Eindhoven, in the southern Netherlands, is the country’s second-largest air hub, after Amsterdam’s Schiphol, and a total of seven incoming flights had to be diverted, while delays were experienced by aircraft waiting to leave.

“Eindhoven airport is once more operational after the traffic was disrupted due to a strange smell” in the control tower, airport officials told AFP.

After air traffic controllers complained of a noxious odor irritating their throats, airport security alerted the Eindhoven fire service which evacuated the tower.

The central Dutch Air Force base took over control and re-directed seven flights to Schiphol as well as to Maastricht in the southeast and Weeze in Germany, just over the border.

“We didn’t find anything to be concerned about,” a fireman from the southeastern Brabant region said on Twitter after carrying out several controls.

After two hours, air traffic controllers were allowed back to work after air measurements did not show any worrisome results. CBB