Marijuana in candies: 2 arrested in school 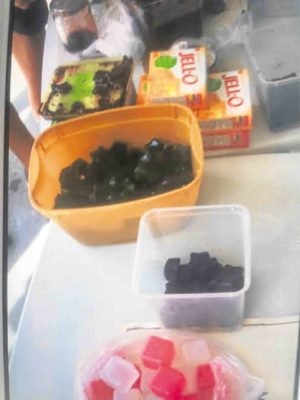 Some of the ingredients being used for marijuana candies. —PHOTO COURTESY OF LAGUNA PNP

SAN PEDRO CITY — Police arrested two persons for allegedly producing candies laced with marijuana, which authorities feared could end up in schools and taken by children.

Supt. Vicente Cabatingan, chief of the Laguna police intelligence unit, on Monday said mixing marijuana in candies seemed to be a new way for dealers to conceal the drugs.

The suspects said they had learned how to spike candies with marijuana in YouTube.

On Saturday, police arrested Bobby Albert Bobcock, a 32-year-old Filipino-American, from his apartment at Park Spring Subdivision in the village of San Antonio here.

Police were armed with a search warrant issued by Judge Agripino Morga of the regional trial court in San Pablo City, Laguna.

“They would mix the drugs into chocolates or gelatin and make small candies out of it,” Cabatingan said in a phone interview.

Each piece of candy costed P100 to P500 depending on how much marijuana it contained.

The raid on Bobcock’s apartment also led to the arrest of his accomplice, Jan Allen Ledesma, 23, a computer engineering student at Malayan Colleges Laguna.

Police set up a buy-bust operation inside the school compound in Cabuyao City, Laguna on Saturday.

Cabatingan said Ledesma had acted as the “chemist” and sold the tainted candies to college students.

“Say, you bring them home and put them in the fridge to keep them from melting, you put other people, like children, in danger as they could easily pass off as normal chocolate candies,” Cabatingan added.