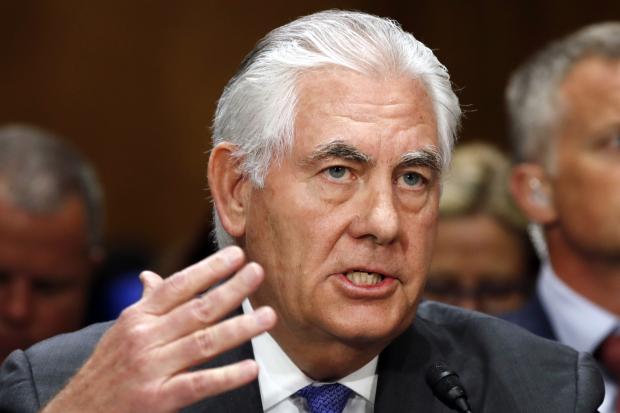 In this photo, taken June 13, 2017, Secretary of State Rex Tillerson testifies on Capitol Hill in Washington. In a dramatic shift, the Trump administration on June 20 demanded that Saudi Arabia and other Arab countries boycotting Qatar produce details of their complaints about the small Persian Gulf monarchy’s support for extremism and reach a speedy resolution to the diplomatic crisis. The comments suggested Tillerson was losing patience in a mediation attempt. (Photo by JACQUELYN MARTIN / AP)

ISTANBUL — As the Gulf crisis over Qatar festers, US Secretary of State Rex Tillerson is embarking on his first shuttle diplomacy mission, heading to the region in a bid to end a deadlock that has badly damaged ties between several key American partners and threatens to hinder counter terrorism efforts.

Tillerson will hop between Kuwait, Qatar and Saudi Arabia from Monday until Thursday, the State Department said, meeting Arab leaders to test new ways of resolving the impasse that has persisted despite Kuwaiti efforts to mediate a resolution.

US officials said Monday that Tillerson did not expect to produce a breakthrough, which they warned could be more than a month away. Rather, they said, he wants to explore possibilities for bringing all sides to the negotiating table.

“We’ve had one round of exchanges and dialogue and didn’t advance the ball,” said senior Tillerson adviser R.C. Hammond. He referred to Qatar’s rejection of 13 demands that Saudi Arabia, Bahrain, the United Arab Emirates and Egypt set out restore diplomatic relations they severed and end a blockade they imposed on Qatar in early June.

“We will work with Kuwait and see if we can hash out a different strategy,” Hammond said.

Hammond, speaking to reporters in Istanbul where Tillerson traveled after visiting Ukraine and attending the G-20 summit in Hamburg last week, said the 13 demands were not viable, at least as a package.

“They are done,” he said. “They are not worth revisiting as a package but individually there are things in there that could work.”

The list of ultimatums to restore ties and end the air, land, and sea embargo included demands to shut down the media network Al-Jazeera, cut ties with Islamist groups, including the Muslim Brotherhood, limit ties with Iran and expel Turkish troops stationed in Qatar.

Hammond would not elaborate on which of the 13 might be possible for Qatar to meet but he said concessions from the Saudis, Bahrainis, Emiratis and Egyptians would be required for a resolution.

“This is a two-way street,” he said, referring in particular to allegations that all the players in the crisis have been involved in some way of funding extremists. “There are no clean hands.”

Washington’s primary concern is halting extremist financing to hold gains being made in Iraq and Syria and prevent the spread of terrorism, which has badly affected Europe. At the G-20 summit, Europeans voiced particular concern to President Donald Trump and Tillerson about the impact the Gulf crisis could have on that front, according to Hammond.

“The patience of the world has changed,” Hammond said, noting that both the British and German foreign ministers had visited Saudi Arabia and Qatar in the past week to discuss the importance of resolving the crisis quickly.

A resolution could have ripple effects as well, he said, including reducing Iran’s influence and ability to support extremists. Iran has been building closer ties with Qatar and is sending food and other supplies there to make up for products that the Arab embargo has kept out.

In addition, there are US military interests at stake. Two of the five countries in the dispute are home to major American military bases: Bahrain hosts the US Navy’s Fifth Fleet, which patrols Gulf waters with a close eye on Iran’s presence there, and Qatar hosts al-Udeid Air Base, which is the largest US military installation in the Middle East and serves as the hub for the US-led anti-ISIS coalition operations in Iraq and Syria.

The specifics of Tillerson’s shuttle travel, including the exact dates for each stop, were still in flux on Monday and not immediately announced.

His decision to embark on the mission nevertheless signaled at least a reluctant acceptance of the critical role the United States could play in taking a more active mediation role, particularly as some believe that Trump may have precipitated the crisis by siding publicly with Saudi Arabia during a visit to Riyadh in May and then pointing out that numerous Arab leaders had complained to him about Qatar.

Since it began, the administration had maintained it was a “family” dispute that should be resolved among the parties without a significant US role. Tillerson himself had made clear his reluctance to get too deeply involved, although he met in Washington with senior officials from the feuding countries.

But with no apparent progress, the State Department warned last week that the dispute could drag on for weeks or months and “could possibly even intensify.”