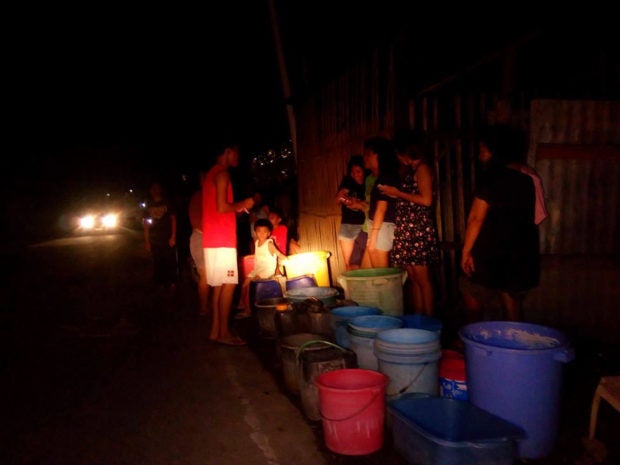 Residents in Tagbilaran City, Bohol, line up their containers while waiting for the water tankers to arrive on July 8, 2017.  Residents have been hit by the double whammy of a power blackout and the subsequent water service interruption after the Leyte earthquake. (PHOTO BY LEO UDTOHAN / INQUIRER VISAYAS)

Residents of Lamdagan Street in Barangay Cogon were carrying their containers as they lined-up to wait for their turn to get water from the water tankers sent by the city government to ration water to the affected areas.

The community is among the 15 barangays (villages) in the city that are affected by the temporary water supply cut-off.

“We have endure the long line because we don’t have water in the house,” said 15-year-old Jezzrel Taal, 15, about the water service interruption, on Saturday afternoon.

Residents along Graham Avenue in Barangay Booy also queued for their water ration until Saturday night.

Others went home when the fire truck didn’t return.

“It doesn’t matter if we don’t have electricity for as long as we have water,” said Bebei Lim, 46.

The Bohol Water Utilities, Inc. (BWUI) in Tagbilaran City used portable generator sets to power one of the water pumping stations along the J.A. Clarin-Dao road for its consumers. But the supply was limited to few areas.

People bought mineral water at P30 to P50 per container instead of the usual P15 to P20 in water refilling stations.

The owners said the increase in prices was due to the added cost since they were using generator sets to operate. 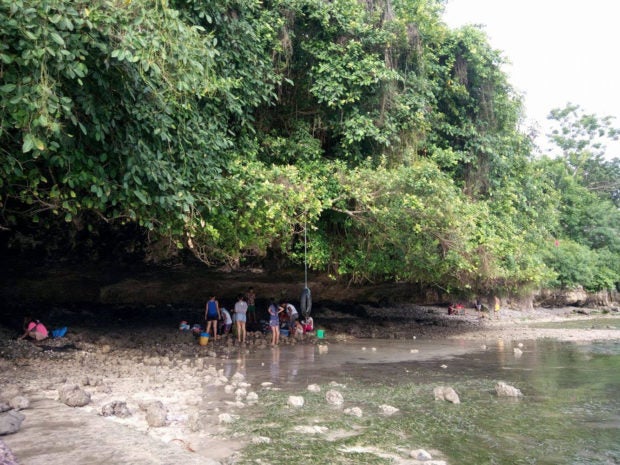 Residents of Tagbilaran City, Bohol, go to the nearby spring to wash their clothes and take a bath after a power outage in Bohol caused water service interruptions following an earthquake centered in Leyte, on July 6, 2017. (PHOTO BY LEO UDTOHAN / INQUIRER VISAYAS)

Some residents would go to Caingget Beach and Bulok-Bulong Spring to wash their clothes and take a bath.

On Sunday, many towns in Bohol still had no power and water supply.

But Mia Cadenas, 59, a resident of Barangay Sto. Nino in San Miguel town said many coped with the situation.

“We were getting used to not having any electricity. The big problem was we could no longer watch our favorite tele-novelas,” said Cadenas.

The water service interruption was not a big deal for some since they could still get clean water from the deep well and spring.