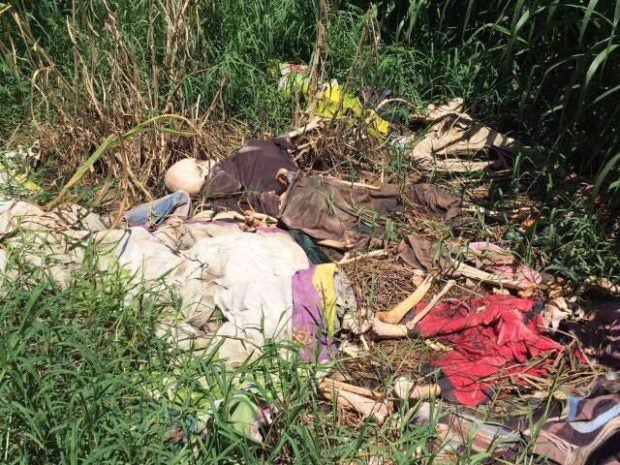 In this photo taken on June 29, 2017,  remains of unidentified people were found in areas of Marawi where fighting has stopped. (Photo taken by Zia Adiong, Lanao del Sur crisis management spokesperson)

MARAWI CITY — Islamic State (IS)-inspired terrorists have killed at least six hostages for refusing to take up arms against government forces, the military said on Sunday.

Lt. Col. Christopher Tampus, commander of the military’s 1st Infantry Battalion, told reporters the military learned about the executions from three hostages who escaped from their captors on June 29.

“That’s what the gunmen inside are doing. They are forcing their hostages to take up arms against our troops,” Tampus said.

“We talked to three hostages, and that’s what they relayed to us,” he added.

The hostages were firing at troops patrolling Lake Lanao, he said.

“They were forced to do that. Six of the hostages were shot and killed in front of them, that’s why they can’t do anything but follow the orders given to them,” Tampus said.

The escapees’ account of the killings, which could not be independently verified, is the latest report of atrocities to come out of the conflict zone in Marawi, where the military is battling terrorists from the Maute group and their allies from an Abu Sayyaf faction that has pledged allegiance to the IS jihadist network in Iraq and Syria.

Eight or 10 hostages who either escaped or were rescued by the military earlier reported that the terrorists forced their civilian captives to loot homes, take up arms against government troops and serve as sex slaves for the terrorists.

Some of the escapees said bodies of residents had been left in the streets, some for weeks, and civilians were distressed by government airstrikes and artillery bombardment that had reduced Marawi to rubble.

The terrorists stormed Marawi on May 23 to establish an IS enclave in Southeast Asia, drawing a military response that included airstrikes aided by US and Australian surveillance aid.

Most of Marawi’s more than 200,000 residents have fled the city and the fighting has cost the lives of more than 470 people—366 terrorists, 85 soldiers and police, and 39 civilians.

‘Just a matter of time’

The military said the terrorists were down to just 80 fighters and a statement it released on Sunday quoted Gen. Eduardo Año, chief of staff of the Armed Forces of the Philippines, as saying the end of the conflict was “just a matter of time.”

Año’s assessment came after receiving a briefing on the conflict on Friday at Camp Ranao, the base of the Army’s 103 Brigade in Marawi City.

Explaining why only 80 terrorists remained when the original enemy force had been estimated at 700, Lt. Col. Jo-Ar Herrera, spokesperson for the 1st Infantry Division, said some terrorists managed to slip out of Marawi “probably in the first two weeks” of the fighting when the military was not yet in full control of Lake Lanao and other parts of city.

There were unverified reports that among those who had escaped was Isnilon Hapilon, the leader of the Abu Sayyaf fighters holed up in the city.

In the final stages of the conflict, Tampus’ troops were tasked to secure the City Hall, 250 meters from the battle zone.

“The enemy’s resistance continues, but they have no more automatic fire … The resistance usually comes from snipers with grenade launchers,” he said.

Herrera said around 300 civilians and hostages were in the battle zone. —With reports from Nikko Dizon in Manila and the wires