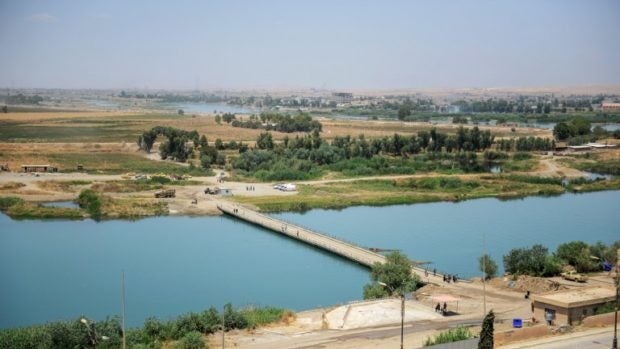 A general view of the Tigris River is seen from the compound of the closed Nineveh International Hotel in Mosul on June 16, 2017. Iraqi troops took over the hotel from ISIS fighters earlier this year. A group of jihadists tried to escape across the Tigris River from west Mosul where they hold a dwindling pocket of territory, but were killed by Iraqi forces, a senior commander said Saturday, July 8, 2017. AFP

MOSUL, Iraq — A group of jihadists tried to escape across the Tigris River from west Mosul where they hold a dwindling pocket of territory, but were killed by Iraqi forces, a senior commander said Saturday.

In the nearly nine months since Iraq launched the massive operation to retake Mosul, the Islamic State group has gone from holding the entire city to being trapped between security forces and the Tigris River on its western side.

But the jihadists have put up fierce resistance in recent days, keeping Iraqi troops from sealing what will be the biggest defeat yet suffered by ISIS.

“Some of them tried to cross to…. the far bank (of the river), but we have forces there,” said Staff Lieutenant General Abdulghani al-Assadi, a senior commander in Iraq’s elite Counter-Terrorism Service.

The jihadists wanted to go back, but security forces “fired on them and killed them,” he said, without specifying how many died.

Iraq’s Joint Operations Command issued a statement saying that 35 ISIS members were killed and six captured when they tried to escape “the advance of our forces” in Mosul’s Old City.

ISIS fighters remaining in Mosul’s Old City — a densely populated area of narrow streets and closely spaced buildings that Iraqi forces have struggled to retake — have been estimated to number in the hundreds.

But the area’s terrain is ideal for the outnumbered jihadist defenders, and the battle is complicated by the large number of civilians trapped amid the fighting.

Mosul is “one of the most difficult urban campaign battles we’ve seen since World War II, particularly in the western side of the city,” Brett McGurk, the US envoy to the international anti-ISIS coalition, told journalists in Baghdad on Saturday.

ISIS overran large areas north and west of Baghdad in 2014, but Iraqi forces backed by US-led air strikes have since regained much of the territory they lost.

The recapture of Mosul will not however mark the end of the threat posed by ISIS, which holds territory elsewhere in Iraq and is able to carry out frequent bombings in government-held areas. CBB/rga