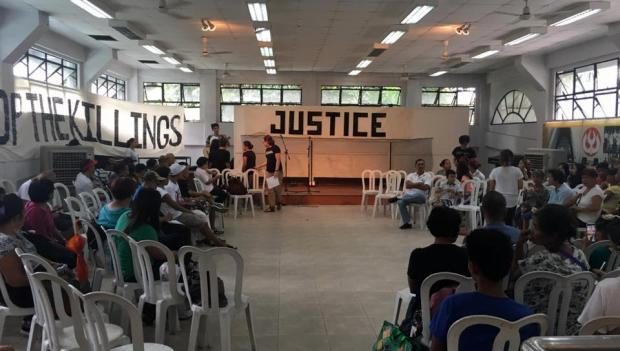 Member of rights groups joined the “Remember, Resist” gathering at the UP Diliman campus on Saturday, July 8, 2017. (Photo from the Karapatan Facebook page)

“President Duterte has commiserated with families of slain soldiers and paramilitaries. Where are his tears for the indigenous peoples, farmers, and urban poor who were killed and violated by his troops?” Evangeline Hernandez, Hustisya chairperson, said in a statement.

The “Remember, Resist” gathering at the Church of the Risen Lord at the the University of the Philippines in Diliman, organized by Hustisya, Karapatan, and Rise Up, sought to memorialize victims of “state repression” while airing the the bereaved families’ continued calls for justice.

From July 1, 2016 to June 30, 2017, Karapatan documented 67 victims of political killings. This is in addition to the government’s tally of more than 3,000 drug suspects killed in police operations and thousands of “deaths under investigation,” which include victims of alleged “vigilante” killings of drug suspects.

Earlier, Karapatan, the Promotion for Church People’s Response, Hustisya, and Pilgrims for Peace noted that under the Duterte administration, the “culture of impunity has worsened” not only because of the drug war, but continued counterinsurgency operations – contrary to Duterte’s self-proclaimed “socialist” bent.

In a joint assessment of Duterte’s first year, the groups recorded 105 attempted killings, three forced disappearances, 49 torture incidents, 927 illegal arrests, 54 illegal searches, and 112 physical assaults and injuries, among others, from July 2016 to May 2017, mostly in the name of the government counterinsurgency program.

Karapatan also recorded at least 392 political prisoners who continue to be behind bars under the current administration, 39 of whom were arrested under the Duterte administration.

On Thursday, 10 political prisoners – including the communist-led National Democratic Front of the Philippines (NDFP) consultant Emetrio Antalan – were granted conditional release from prison for the peace talks between the NDFP and the Philippine government.

Karapatan Secretary General Cristina Palabay, however, tagged the release as just “bread crumbs” and that it should not be used as a “bargaining chip by the government to impose on the NDFP a bilateral ceasefire agreement and further undermine discussions on the substantive agenda such as human rights and international humanitarian law, socioeconomic and political reforms.”

“The release of all political prisoners, we repeat, is an issue of justice and should not be dependent on the whim and caprices of the military or even the President,” Palabay said. “Duterte should be compelled by the Filipino people to address the roots of social problems, instead of his furthering of fascist attacks.” /atm