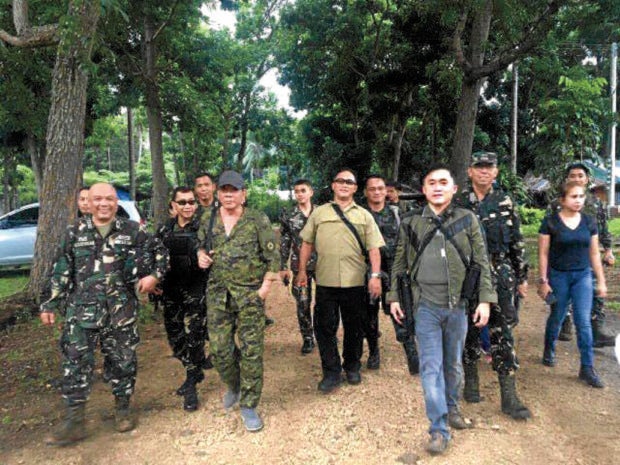 In combat fatigues, President Duterte visits the Army camp in Iligan on Friday. Bad weather foiled what would have been a surprise visit to Marawi City. —MALACAÑANG PHOTO

ILIGAN CITY—President  Duterte made an unannounced visit to the headquarters of the 2nd Mechanized Brigade (MB) in Barangay Maria Cristina here on Friday, Malacañang said.

The surprise visit came amid reports he was going to Marawi City where 85 soldiers had already been killed in the clashes between the military and the Maute group.

The Presidential Communications Operations Office (PCOO) confirmed that Mr. Duterte was supposed to visit Marawi, some portions of which were still occupied by Maute terrorists, but the trip was canceled.

“The President was supposed to go to Marawi City … but decided not to push through because of inclement weather,” the PCOO said in a statement.

Dressed in combat fatigues, Mr. Duterte was accompanied by Special Assistant to the President Christopher Lawrence Go and his close-in security.

During his visit to the 2MB, Duterte again assured soldiers of his unwavering support to troops battling the Maute group.

It was the third time Duterte visited Iligan since the Marawi crisis started on May 23. —ALLAN NAWAL AND PHILIP C. TUBEZA