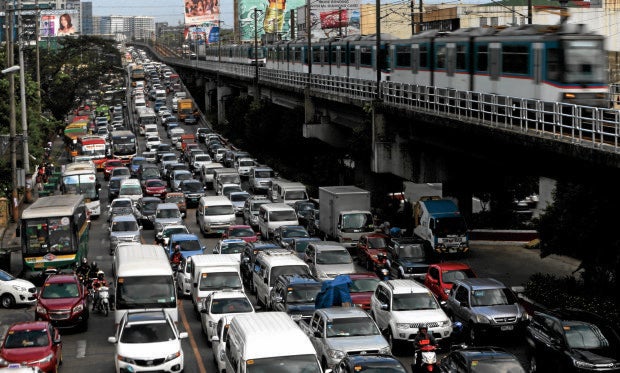 Car volume has been blamed as one of the main causes of the heavy traffic in Metro Manila. (File photo by EDWIN BACASMAS / Philippine Daily Inquirer)

Motorists and commuters who have been waiting for a solution to the debilitating traffic problem in the metro would have to be a little bit more patient for another month, as Tim Orbos, the newly appointed transport undersecretary for road transport, said that he would come out in August with a traffic management plan that would put forward short-term solutions to address road congestion.

Speaking to reporters, Orbos, who would also head the revitalized Interagency Council on Traffic (I-ACT), said that he has committed to Transport Secretary Arthur Tugade and Metropolitan Manila Development Authority (MMDA) chair Danilo Lim the release next month of a plan that would ensure that traffic rules and regulations are implemented in a “cohesive” way throughout the metro.

Orbos, who would still stay on as the MMDA’s general manager, noted that while he understands that the huge volume of cars is one of the major reasons of congestion in the metro, the public couldn’t be restricted in buying cars just yet because there’s a need for it.

“In the meantime, this causes traffic. So what are we going to do about it? We can’t just blame [the traffic problem] to the increasing number of cars. We have to do something about it,” Orbos said. “The challenge for me is to come out with a traffic management plan that should address short-term solutions and take cognizance of the long-term solutions.”

Last year, the I-ACT was formed as a precursor to the superbody being eyed by the Department of Transportation (DOTr) should Congress grant President Duterte emergency powers to address the traffic crisis. This was composed of the DOTr, MMDA, Land Transportation Franchising and Regulatory Board, Land Transportation Office and the Philippine National Police’s Highway Patrol Group.

The initiative, however, floundered as Congress has yet to grant the Duterte administration emergency powers. Orbos said that more than being a supervisory body, I-ACT under his leadership would primarily work on coordinating traffic efforts of the various departments and local governments previously excluded from it.

This includes the Department of Public Works and Highways, and the local governments in Cavite, Laguna, Batangas and Rizal, among others. JPV