Floods in Japan kill 6; search for 20 missing slowed by mud 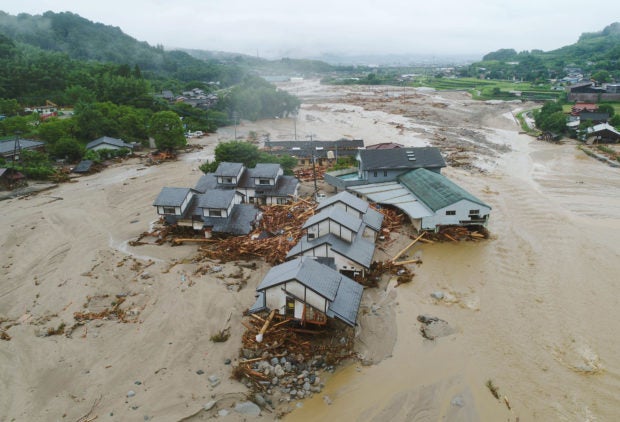 Houses are collapsed and half-buried in the mud following the flooding caused by heavy rain in Asakura, Fukuoka prefecture, southwestern Japan, Friday, July 7, 2017. Heavy rain warnings were in effect for much of the southern main island of Kyushu after Typhoon Nanmadol swept across Japan earlier in the week. (Koji Harada/Kyodo News via AP)

Troops and rescuers gained access Friday to some of the villages that were cut off by torrential rain and rescued more than a dozen stranded residents, officials said.

Heavy rain warnings are still in place for parts of the southern island of Kyushu after Typhoon Nanmadol (known in the Philippines as Emong) swept across Japan earlier this week, dumping rain that has wrecked homes, roads and rice terraces.

Amid search and rescue, Japan’s royal family decided to postpone Saturday’s formal announcement of Princess Mako’s engagement with her college classmate out of consideration for the suffering of people in the affected areas, Japanese media reported.

Chief Cabinet Secretary Yoshihide Suga said 12,000 troops and rescuers were focusing on remote villages where hundreds are still stranded. The operation has been slowed by mud and floodwaters and more flooding was forecast for the country’s east.

The four bodies were retrieved in Asakura town in Fukuoka prefecture, one of the hardest hit areas. One man was found Thursday after he was covered by a mudslide and the three others, including a couple, were swept away by floodwater.

Television footage showed rice fields and homes flooded after a river overflowed its banks. Roads and bridges were damaged and dozens of vehicles and houses destroyed and half covered with mud. Residents from remote villages were being airlifted by military helicopters while soldiers waded through floodwaters carrying elderly residents on their backs.