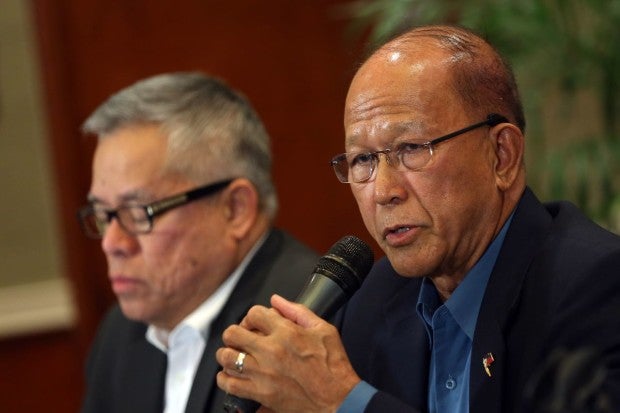 MARAWI CITY — Defense Secretary Delfin Lorenzana has admitted that he has thrice provided a bum steer, albeit unintended, to the media about the end of the crisis here.

Lorenzana admitted on Thursday that he had underestimated the number of the Maute group’s fighters and its allies here.  This was why he earlier claimed the war here could probably end in just three days or about a week.

“Yes that’s correct. I underestimated the Maute. Before, I said tatlong araw (three days). In fact, when I was in Moscow narinig ko yan tatlong araw tapos na yan. Pagdating dito at narinig ko medyo matagal, sabi ko isang linggo…dalawang linggo (…I heard it would just take three days to finish the war.  When I came here and heard that it would take longer, I thought it would take a week… two weeks). So it turned out that we underestimated them,” he said.

He said the initial estimate of the enemy’s strength was just about 250, but it turned they were way more than that.

Lorenzana said when they got to talk to a Marawi barangay (village) official, they learned that the number of the Maute gunmen was about 700.

“We did not know they were that many and that they had established a foothold in the city,” he said.

But Lorenzana said, the fighting capability of the terrorists has been waning and that the fighting might be over soon.

“Malapit na. Ayaw ko lang magbigay ng deadline dahil tatlong beses na akong nakuryente dyan eh sa kakadeadline ko. Nahihiya na ako. So pinapaubaya ko na sa mga company commanders to do their job (The fighting will be over soon.  I just don’t want to set a deadline because I had ended up with a bum steer three times because of my deadline-setting. I’m embarrassed now.  I just now leave it to the company commanders to do their job),” Lorenzana said candidly.

“We are not micro-managing this event and we know the urgency. They know the urgency of finishing the job here so that the civilians can come back to their homes,” he added.

Lorenzana said the military should clear the city first of every Maute and Abu Sayyaf terrorist before allowing the return of residents to prevent the resurgence of the crisis through hostage-taking.

“According to the ground commanders, sana wag muna dahil baka magtakbuhan ang mga kalaban sa kanila at mahostage pa sila (… it’s not advisable to let the residents return at this point because the enemy might take hostages again),” he explained.

“Now, as the chairperson of the rehabilitation of Marawi, I would like nothing better than the end of hostilities para makabalik na mga evacuees (so that the evacuees to return to their homes and resume normal lives). Pag natapos ang putukan dyan (When the gun battle is over), we can return already the evacuees to those areas na hindi naman delikado (which are not dangerous), except the sites of heavy fighting. May mga un-exploded ordnance dyan at baka naman pag pinabalik natin sila, maputukan sila kaya wag na muna (There are many un-exploded ordnance there and besides, if we bring them back now, they might get caught in the crossfire again),” he said.  SFM