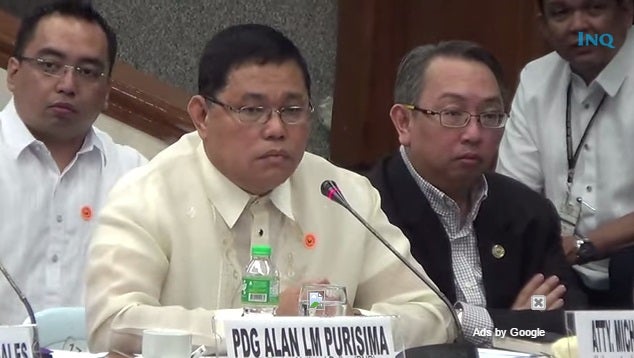 The impending forfeiture case to be filed in the Sandiganbayan will also cover his wife Ma. Ramona Lydia—an employee of the Armed Forces of the Philippines Mutual Benefits Association—as well as his sons, Rainier Van Albert, Eumir Von Andrei, Alan Jr., and Jason Arvi.

In a 51-page resolution dated July 4, Morales also ordered Purisima’s indictment in the Sandiganbayan for nine counts of perjury over his alleged failure to declare his correct wealth in his Statements of Assets, Liabilities and Net Worth for the years 2006 to 2009.

And while Purisima has already been dismissed twice before for other controversies, the Ombudsman again slapped him with the same penalty, perpetually barring him from government service anew, for the administrative offenses of grave misconduct, serious dishonesty and acquisition of unexplained wealth.

Since it could no longer be enforced, the penalty is convertible to a fine equivalent to one year’s salary.

Purisima was a close friend of former President Benigno Aquino III. Thus, the Volunteers Against Crime and Corruption, one of the complainants in this case, considered the Ombudsman resolution a “triumph for justice in the country” which “sends a very strong message.”

“We have to bear in mind that Mr. Purisima is a symbol of what was essentially wrong in the previous administration, namely, preferential treatment for friends of the powers that be,” VACC spokesperson Arsenio Evangelista told the Philippine Daily Inquirer in a text message.

“It has to be stated that Mr. Purisima’s stint as Chief-PNP was laden with so many scandals and misdeeds,” he said.

According to the anti-graft body’s investigation and analysis, the Purisima family “accumulated wealth manifestly out of proportion to their salaries and other lawful income.” 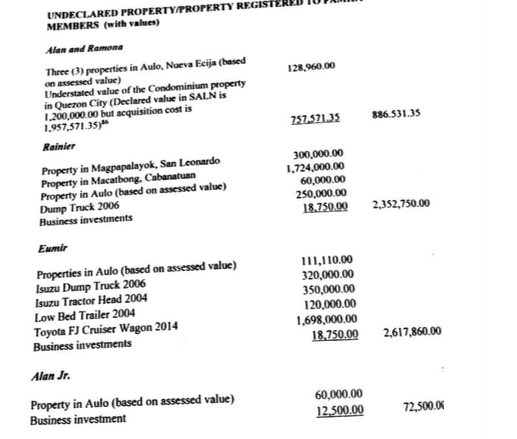 The undeclared properties of former PNP chief Alan Purisima, according to the Office of the Ombudsman, which filed forfeiture proceedings and perjury raps against the former PNP director general on July 4, 2017. (PHOTO BY VINCE NONATO / INQUIRER)

This leads to a hefty discrepancy of P22.87 million, which the Ombudsman already found questionable.

The Purisimas were also alleged to have failed to declare another P6.42 million in real properties, vehicles and various business investments. Taken together, the undeclared assets and the excess expenditures total P29.29 million.

The Ombudsman noted that while Purisima declared in his SALNs that he had other business interests, he never disclosed his income which would have explained his wealth.

The spouses also reported only their compensation income (earnings from salaries and employee benefits) in their income tax returns from 2003 to 2013. The said ITRs were “completely bereft of information” regarding other sources of income, and Purisima’s supposed business interests were found not to have any income tax records.

Purisima later elaborated on his other income sources only after the Bureau of Internal Revenue on Oct. 28, 2014 complied with a subpoena issued by Ombudsman investigators.

Afterwards, Purisima made “wholesale amendments” of his ITRs from 2004 to 2013 using a different form for the reporting of business and professional income. The changes were completed 24 days after the BIR complied with the Ombudsman subpoena.

Yet, the Ombudsman said the amended ITRs were also “replete with badges of falsity and misdeclaration.” It said the reported business income was not supported by financial statements and the taxes remitted by withholding agents.

This led the Ombudsman to conclude the belated declarations in his ITRs were “a mere afterthought in response to the lifestyle check” and were only “aimed to justify his and his family’s acquisition of real and personal properties.”

Morales also rejected Purisima’s defense that some of the properties were declared under the names of his sons who were gainfully employed.

The Ombudsman said there was not enough proof that his children had sufficient financial capacity, leading her “inevitable conclusion… that their acquisitions and investments were made possible through the funds of P/DG Purisima himself who failed to account for the sources of these.”

Besides these mounting liabilities, Purisima may also have to answer before the Department of Agrarian Reform, as the Ombudsman referred the case to ascertain how he availed of the land in Aulo, which has been covered by the Comprehensive Agrarian Reform Program.

The consolidated resolution covered the criminal complaints filed by the VACC, the Coalition of Filipino Consumers, lawyer Jose Teddie Rosario, and the Fact-Finding Investigation Bureau of the Office of the Deputy Ombudsman for the Military and Other Law Enforcement Offices, a unit of the Office of the Ombudsman.

Purisima was previously hounded by graft allegations over a May 2011 agreement with Werfast Documentary Agency, Inc., for the mandatory delivery of firearms licenses, despite the courier firm’s alleged lack of credentials and failure to abide by business requirements. This led to his dismissal from public service in June 2015.

He was later held liable for usurpation of authority and graft for taking the reins of the PNP’s botched January 2015 operation in Mamasapano, Maguindanao, despite his suspension at the time pending investigation for the Werfast deal. This resulted in his second dismissal in April 2016. The criminal charges arising from the Werfast and Mamasapano cases are currently pending in the Sandiganbayan.  SFM